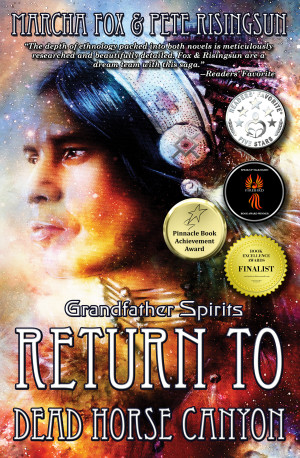 5* Readers' Favorite Sequel to multi-award winning "The Curse of Dead Horse Canyon: Cheyenne Spirits." Northern Cheyenne Charlie Littlewolf's job with an oil company earns a generous income but conflicts with his heritage. Will there be consequences? Fulfilling her dead husband's dying plea to expose the government corruption he discovered places Sara Reynolds in the cross-hairs of a hired killer. More
The Dead Horse Canyon Saga Continues. . .

"I went into Return to Dead Horse Canyon not having read the first book and while it does read comfortably as a stand-alone, after just a couple of chapters I actually went back to read The Curse of Dead Horse Canyon before restarting book two. It was an excellent decision. The building of the Cheyenne history is critical to the story and had I not understood Sara’s complete motivation and Charlie’s fully fleshed-out roots, I’d have missed out on so much more than just a good read.

"My gosh, the depth of ethnology packed into both novels is meticulously researched and beautifully detailed. Co-authors Marcha Fox and Pete Risingsun are a dream team with this saga and I’m really looking forward to the third and final installment of their trilogy"

When Charlie Littlewolf and Sara Reynolds discover why her husband, Bryan, was murdered, their lives change forever. While Charlie swore to avenge his white brother's death, the path to do so remains unclear.
His job with Lone Star Operations provides the opportunity to use his college education and earn a generous income. However, it conflicts with everything he knows to be right. Is violating the Earth wrong or not? Little does he realize that his work will ultimately return him to his people on the Northern Cheyenne reservation where his true destiny will manifest in ways he never imagined.

Sara is determined to fulfill Bryan's last request to expose the government corruption as well as the lethal forces that took his life. Releasing the scandalous Top Secret data via WikiLeaks infuriates those with much to lose, who place a high price on her demise. Her response gets a bit too personal, subsequent efforts to silence her forever closer to home than she realizes.

While miles apart, each struggles with life-threatening situations inspired by their dedication to Bryan's legacy. Their lives remain entangled through a series of everyday decisions and circumstances that define a future wrought with unknowns for them both.

Before publishing "The Curse of Dead Horse Canyon" Marcha wanted to confirm her portrayal of Native American culture and the story's protagonist, Charlie Littlewolf, was accurate as well as not offensive in any manner. She was fortunate enough to find Pete Risingsun, an enrolled member of the Northern Cheyenne tribe, who did the honors. Pete offered insights and changes, but best of all, was so taken with the story he ultimately became its co-author.

Marcha's experience as a retired NASA engineer and seasoned author of the science fiction series, "The Star Trails Tetralogy," combined perfectly with Pete's knowledge of his tribe's history and ceremonies. The pair, who has never met face to face, collaborated via phone call and text messages between her home in the Texas Hill Country and his on the reservation in Montana. Thus far they have produced two multi-award winning thrillers in the "Dead Horse Canyon Saga."
The collaboration has been comfortably divided with Pete taking the lead on Charlie's role while Marcha develops the other characters and over-all plot, then tying them together in a manner that has earned several awards and dedicated fans anxiously awaiting the third and final volume of the trilogy.

In preparation for writing the saga's explosive conclusion, Marcha and Pete have conducted extensive research. In doing so, they have uncovered fascinating details of Northern Cheyenne history and ceremonies that dove-tail perfectly with the complex tale and tie multiple plot threads together that reach back to the 19th Century. (Forthcoming Spring/Summer 2023)

Return to Dead Horse Canyon Trailer
Sara Reynolds exposes the dark government secret for which her husband, Bryan, was murdered, placing her on the hitlist of a hired killer. Charlie Littlewolf, Bryan's Native American best friend, vows to avenge his death, but first fate returns him to the reservation to pursue a far greater destiny.

A lot has changed in the 140 years since Black Cloud pronounced a curse on Colorado's Dead Horse Canyon. Or has time simply proven that the more things change, the more they stay the same? From a drunken hoard of 19th Century silver miners to EPA Superfunds and the 21st Century halls of Congress, man's quest for domination has polluted the Earth and persecuted the people who honored her. Enough is enough.
Book 1
Before Bryan Reynolds can expose the scandalous Top Secret project he discovered he's killed in a suspicious accident his wife, Sara, miraculously survives. Her memory of where they were or what they discovered, however is gone. Neither she nor Bryan's life-long Cheyenne friend, Charlie Littlewolf will rest until they find out what Bryan discovered that cost him his life. Charlie is acutely aware the only way to solve the mystery is to return to his roots and teachings of his medicine man grandfather, which he has shunned for decades.
Book 2
Charlie Littlewolf's lucrative job with an oil company conflicts with his heritage. Will there be consequences? Fulfilling Bryan's dying plea to expose government corruption places Sara in the cross-hairs of a hired killer.

You have subscribed to Smashwords Alerts new release notifications for Marcha Fox.