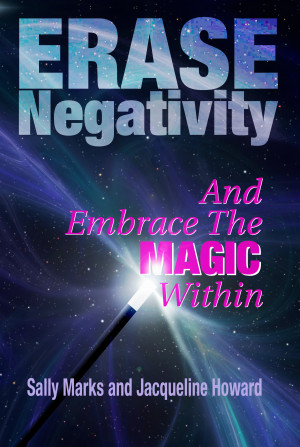 Erase Negativity and Embrace the Magic Within

Sally Marks is a public relations professional and an award-winning journalist who graduated with honors from the Walter Cronkite School of Journalism at Arizona State University. In journalism, she has won awards for news writing, editorial writing and headline writing. Her articles have been published in numerous national, regional and local newspapers and magazines that range from the international Living Buddhism magazine to Arizona’s popular Phoenix Home and Garden. Her screenplays, The Heir, Voices from Hell and Gay for a Day have won five awards and placed in national and international competitions.

Jacqueline Howard is a motivational speaker, educator and coauthor of Erase Negativity. She has been deemed a Master Teacher by spiritual leaders throughout the United States and the British Isles for her intuitive skills. Howard developed a strong reputation for taking esoteric inspirational and spiritual messages from Native American culture, Taoist philosophy and quantum physics and turning them into simple, life lessons that she has presented to hundreds of men and women across the nation.

Three Easy Tips to Erase Negativity
See how three simple tips can help you erase negativity from your life.

Five stars for sure.

(reviewed the day of purchase)
Michele Leon reviewed on May 4, 2010
(no rating)
Simple answers to get us through out lives. Very hopeful and amazingly on target. Take the first small step!

(reviewed the day of purchase)
maryroseforsyth reviewed on April 15, 2010
(no rating)
Loved this book... A true inspiration for those that need something positive in their lives... I give it 5 stars! Go for it.

You have subscribed to alerts for Sally Marks.

You have been added to Sally Marks's favorite list.

You can also sign-up to receive email notifications whenever Sally Marks releases a new book.