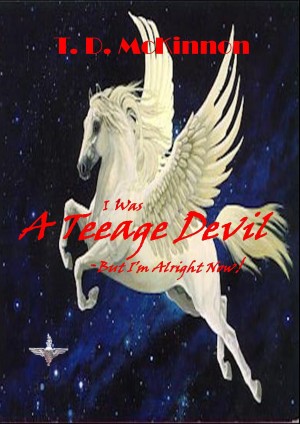 I Was a Teenage Devil - But I'm Alright Now!

By T.D. McKinnon
'Teenage Devil' is the sequel to 'Surviving', but it stands on its own, dealing with a different set of, no less significant, moral issues. And it's still a story about growing up. On one occasion, an old devil comes-a-calling (a predator, disguised in the form of a senior RAF officer) and Thomas decides to commit the ultimate sin! Fully committing himself to the task, can he actually take a life? More
'I Was a Teenage Devil - But I’m Alright Now!' is a true story. It is the continuing saga of Thomas, our protagonist from 'Surviving the Battleground of Childhood', and follows him into the British army. At just fifteen years of age he swaps the coalmining communities for Aldershot: home of the British Army. In order to escape the environment that bound him, our intrepid survivor joins the Parachute Regiment (the ‘Red Devils’) as a junior leader.

The story continues as he struggles to negotiate with his new environment, as one of sixty new recruits, and then follows him as he continues to grow up through the second half of his teens, steeped in the elitism of the ‘Red Devils’.

Along the way our hero encounters his fair share of adventures, and misadventures. On one occasion, an old devil comes-a-calling (a predator, disguised in the form of a senior Royal Air Force officer), stirring a rage within, and Thomas decides to commit the ultimate sin! Fully committing himself to the task, can he actually take a life?

As he searches for emotional validity, his trysts and affairs of the heart vary from fleeting, to sordid, to totally absorbing. Finally he meets the girl of his dreams and he holds on for all he's worth; has Thomas finally found happiness? Or will it crumble, leaving him with a handful of dust and a sour taste in his mouth?

'Teenage Devil' is a sequel, but it stands on its own, dealing with a different set of, no less significant, moral issues; and it's still a story about growing up.

Born in Scotland in 1950 and raised in the coal mining communities of Scotland and England, T.D. McKinnon joined the British Parachute Regiment when he was just fifteen years old. After spending five years in the British army he worked at a number of occupations including bus driver, furnace-man, builder's labourer, roofer, bouncer, storeman, car salesman, lifeguard, aquatics manager, private investigator and for many years he was in high-risk security: event and venue security, close personal protection, cash and gem escort and armed, rapid response for a national bank group.

Training in the martial arts for most of his life and becoming a master in several forms he represented at the national level, both in Scotland and Australia, and became a national referee. As well as teaching and instructing in the private sector, he taught at government and private schools; also in the corporate sector (security industry).

Whilst at school T.D. McKinnon displayed a natural talent for writing, but it wasn't until the 1980s, after moving to Australia, that he began writing again. Initially writing for his own enjoyment, after having publications in the 'Letters to the Editor' columns of several Sydney newspapers, the inevitable, delayed budding of his writing career began. Following articles published in 'Impact, Blitz and 'Combat', martial arts magazines, and 'The Green Earth', an environmental newspaper, he began submitting short stories to various magazines e.g. 'Cosmopolitan' etc.

T.D. McKinnon writes in several genres including action/thriller, speculative fiction, memoir and historical fiction. Thomas is now writing full time and has completed 'Surviving the Battleground of Childhood', 'I Was a Teenage Devil - But I'm Alright Now!', 'John Farrell Is Utrinque Paratus', 'Trilogy of the One God', and 'Terra Nullius'.

T.D. presently lives in Tasmania, Australia with his wife Zoë, a professional actor, singer and dancer. Zoë is the editor of T.D.'s works; additionally, she designs and creates the book covers.

Also in Series: Construction of a Personality

You have subscribed to alerts for T.D. McKinnon.

You have been added to T.D. McKinnon's favorite list.

You can also sign-up to receive email notifications whenever T.D. McKinnon releases a new book.