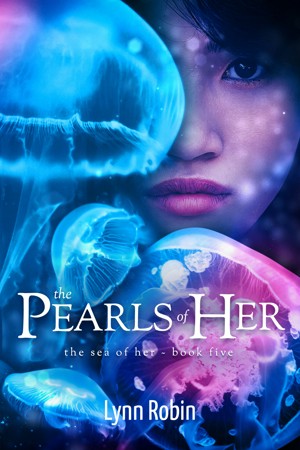 Madam Deep’s mask has fallen, Kaholo’s true identity has been unraveled, and amidst the chaos, the turmoil of emotions, and the storm of confusion, Leilani has to give everything to prevent Madam Deep from selling her at the auction and taking the lives of Keanu and Sora.

As she dives into the darkest, unknown depths of herself, Leilani has to find a way not to lose all of her to the shadowy brothers she made a deal with.

But it is the only way to escape the Deep.
The only way to save her dear stranger from the sea, who is battling phantoms of his own and questions who he truly is, has always been, and is supposed to become.

Leilani, the Princess.
Keanu, the Guardian.
They both have their task to fulfill.

Lynn Robin (1992) is an author of Paranormal Romance novels.

Born and raised in the historical city of Leiden in the Netherlands, she has felt the urge to write stories ever since she was little— preferably ones with ghosts and other spooky things (probably because her parents let her watch Stephen King film adaptions when she was nine).

Next to that, she likes to add a healthy dose of romance to her books; star-crossed lovers and forbidden romances, preferably about monsters hiding in the bodies of young men, and girls blessed with angelic powers—or at least humans touched by magical abilities.

She made her debut in 2017 with her Dutch series entitled the Schimmenwereld Serie (the Phantom World series), containing six books about ghosts, angels, demons, music, dance, art, and—of course—love. She won the Best Book of 2018 award with the fourth installment, Schimmendroom (Phantom Dream), chosen by the jury of The Dutch Indie Awards.

In 2020 she debuted internationally in English with the highly romantic Kissing Monsters series which concluded with 8 volumes in 2021. Her latest release is The Sea of Her, a still ongoing paranormal romance series in a tropical setting about the Weeper of Pearls, a Wild Stranger from the Sea and a long-lost King of the Ocean.

You have subscribed to Smashwords Alerts new release notifications for Lynn Robin.