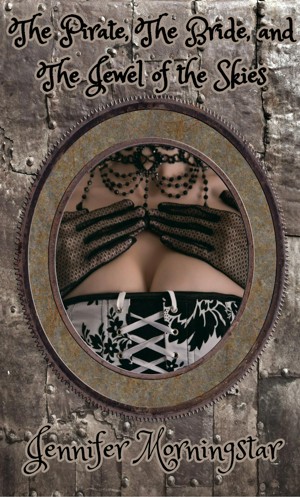 The Pirate, The Bride, and The Jewel of the Skies

Reviews of The Pirate, The Bride, and The Jewel of the Skies by Jennifer Morningstar

This was an awesome short romp with shockingly deep characters and great worldbuilding for such a small story. Part of me wishes this was a novel because the setting is so cool, but I also love how tight and concise this is just how it is.

On the surface, one could look at this story and think it's just about two people banging in a glass window in the middle of a lightning storm. Which is, admittedly cool. But there's so much more I love here, and in typical Jenny fashion, it's the choices the characters make and why they make them.

This could have easily been a pirate boosting a ship and 'oops kidnapped a hot girl.' But this pirate isn't a turd, and the bride actually has *gasp* agency! Since he's stealing the ship from her recent ex-fiance/almost-husband, Catherine is totally down for it. She's also down for the D, because she has fantasies about hot pirates.

So not only does she demand the pirate take her a'pirating with him, she also decides she's going to seduce him to fulfill her greatest desires (in the cutest way possible), thus melting the cold heart of a man who always works alone. And yes, they also bang in a glass dome in a lightning storm, which is the coolest and most creative way to bang in a steampunk pirate erotica.

And of course the spice was deliciously spicy and beautifully written. I expect nothing less from this author. Highly recommend!

You have subscribed to Smashwords Alerts new release notifications for Jennifer Morningstar.

You have been added to Jennifer Morningstar's favorite list.

You can also sign-up to receive email notifications whenever Jennifer Morningstar releases a new book.