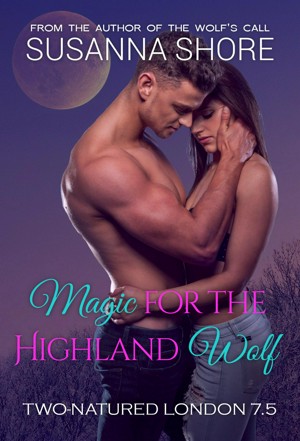 Seonag MacAslan is a bear-shifter who cannot shift or form the mating bond. She shouldn’t be dreaming of Angus Shaw, the wolf-shifter alpha of Shaw Clan. And then she’s given a chance to become a proper shifter. It’s a choice between what she loves—playing rugby, only allowed for humans—and who she loves. But there’s a killer at their tail. She might not have time to choose before it’s too late. More
Angus Shaw, the new alpha of the Shaw clan, has a pressing responsibility: finding his uncle Fergus who has disappeared into the Highland wilderness to mourn his mate. The mate that Angus had to execute for treason. So why is it that his mind is suddenly occupied with a bear-shifter woman he’s know all his life?

Seonag MacAslan is a bear-shifter who cannot shift. She’s grudgingly come to accept it and found purpose in playing pro-level rugby that other shifters are excluded from. She should be preparing for an international match, but instead her mind is filled with images of a naked, muscled wolf-shifter alpha.

Shifter mating isn’t for Seonag though, because she can’t form the mating bond. And then she’s given a chance to become a proper shifter.

About the Series: Two-Natured London

Two-Natured London where vampires, shifters and sentients co-exist uneasily with one-natured humans. There is Greenwood clan wolf-shifters who have an enemy that just won’t give up, and the Crimson Circle, an organisation of elite vampire warriors that battle renegade vampires in the City at nights. They find romance in the most unexpected places and with unlikely people. Follow the fierce warriors softened by their need to protect, and wolf-shifters whose wolves put out a call for the best possible mates.

Reviews of Magic for the Highland Wolf. Two-Natured London 7.5. by Susanna Shore

You have subscribed to Smashwords Alerts new release notifications for Susanna Shore.

You have been added to Susanna Shore's favorite list.

You can also sign-up to receive email notifications whenever Susanna Shore releases a new book.