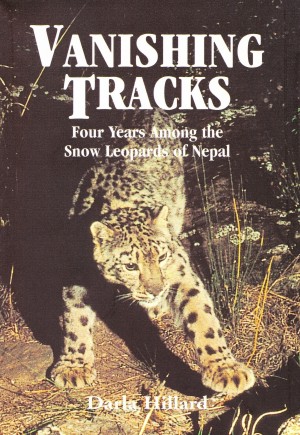 Vanishing Tracks: Four Years Among the Snow Leopards of Nepal

By Darla Hillard
This is the extraordinary account of the first scientific expedition to radio-collar and study the rare, elusive snow leopard in its natural habitat. It is also a story of love and high adventure that provides a fascinating, affecting profile of a people inhabiting one of the most isolated and inhospitable regions in the world—the Kanjiroba Himal of western Nepal. More
At thirty-two, Darla Hillard was working as a secretary, satisfying her love of the outdoors only during vacations. She had no scientific training or obvious qualifications to become a member of the Snow Leopard Project—except for her determination and faith in Rodney Jackson, the wildlife biologist with whom she fell in love. Darla helped Rodney prepare a proposal for the study. It won one of five Rolex Awards for Enterprise, providing the project with its first significant research grant. Darla quit her job to embark on the adventure of a lifetime.

In four field seasons in the dramatic Langu Gorge, Darla, Rodney, and their team endured the snows of the worst winter in western Nepal’s living memory, monsoon rains that sent landslides and boulders tumbling through their study area, and the isolation and danger of being a two-week hike away from the nearest airstrip. They overcame the natural obstacles of the Langu Gorge’s precipitous terrain; Rodney himself suffered a snow leopard bite that postponed the study for a month.

But out of these hardships and frustrations comes the reader’s shared euphoria of each successive capturing and collaring of five cats, producing a landmark study that helped unlock many of the secrets to this imperiled creature’s survival in the wild, and a lasting affection for the hardy mountain people with whom the team lived.

Darla Hillard's nonfiction account, VANISHING TRACKS: Four Years Among the Snow Leopards of Nepal, is the only published behind-the scenes story of studying this rare, almost mystical wild cat. Darla, who is also the education director of the Snow Leopard Conservancy, is working on a novel, Hawk Hill.

Darla grew up in California, and lives in Sonoma with her husband Rodney Jackson, the foremost authority on snow leopards.

Reviews of Vanishing Tracks: Four Years Among the Snow Leopards of Nepal by Darla Hillard

You have subscribed to alerts for Darla Hillard.

You have been added to Darla Hillard's favorite list.

You can also sign-up to receive email notifications whenever Darla Hillard releases a new book.