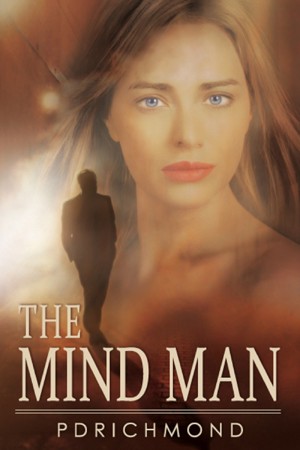 Rated 4.43/5 based on 7 reviews
Do your thoughts affect other people?

What if those people end up dead?

The unthinkable is happening. People are dying inexplicably. Just one man appears responsible…a deranged monster or a madman?

A reluctant cop sets out to find the truth. He risks all and loses everything, but discovers a tortured soul; consumed by revenge and manipulated by an adolescent infatuation. More
“...Fast paced reading that will prove hard to put down, "The Mind Man" is a fascinating...novel, highly recommended” - Midwest Book Review

“The ending is superb. I look forward to more books by P. D. Richmond” - Readers’ Favorite

“The Mind Man” is such an extremely suspense-laden and highly thrilling read, that I simply could not put it down…As most of the chapters end with a cliff-hanger, “The Mind Man” is an absolute page turner...For a completely gripping and unforgettable reading experience I recommend “The Mind Man” as an absolute must-read deserving of far more than the 5 stars I can give it” - Books4Tomorrow

Do your thoughts affect other people?

What if those people end up dead?

The unthinkable is happening. People are dying inexplicably. Just one man appears responsible…a deranged monster or a madman?

A reluctant cop sets out to find the truth. He risks all and loses everything, but discovers a tortured soul; consumed by revenge and manipulated by an adolescent infatuation.

And what’s the deal with the fluffy rabbit?

A spine-tingling, emotional rollercoaster with a sumptuous dusting of romantic intrigue.

“The Mind Man is a very highly recommended read. It has everything you want from a good book – love, suspense, murder and suspicion” - Orchard Book Club

"I was captivated from beginning to end." - Rita Reviews

If you are a fan of the style of Stephen King and the pace of Matthew Reilly, then you are going to love the unique twist of The Mind Man!

Richmond is a graduate from the University of Tasmania.

He spent many years working in the spatial-information industry; two of which were spent mixing it with the Kurds in pre-war Northern Iraq, as a consultant for the United Nations.

After evacuating himself to Russia he resided for twelve months in Moscow, acquainting himself with Russian life, enduring freezing winter temperatures, writing restaurant reviews for an ex-pat website and enjoying the cafe culture of a blissful Moscow summer.

Upon returning to Australia he devoted himself to writing fulltime. Many of his fiction short stories have been published in magazines such as "The Tasmanian Surveyor" and "Azimuth" and he has received an award for one of his poems "A Parent's Plea" in the 2010 FreeXpresSion Literary Competition. Richmond is a member of the Bondi Writers' Group (Fellowship of Australian Writers).

He lives in Sydney with his wife and two sons.

What if a person could concentrate hard enough to control another person's mind, making them do things they normally wouldn't? What if this person was bullied as a child and wanted revenge? Is it possible to become extraordinarily wealthy with such talents? You'll find out once you get started reading Peter Richmond's paranormal thriller, "The Mind Man," and you won't be able to put it down.

Richmond takes you on a romp around the world as he weaves together the relationships between all of the characters in this highly entertaining story. His place descriptions from Australia, Rarotonga, Mexico, and Europe make you feel like you are there right along with the well developed cast of characters who you'll enjoy getting to know.

Ted is a cop who doesn't like his job and dreams of changing careers to become a California wine grape grower. His wife isn't on board though and when a freak accident happens on the local interstate, Ted finds himself getting swept up into the most gripping investigation of his career. He involves his reluctant wife Sally, who's relationship with the antagonist, Adam Henderson creates even more tension for Ted.

You'll have to read the story to learn about Adam. Richmond did a fantastic job creating his "Mind Man," Adam who is responsible for most of the plot. Ted does something really cheesy near the story's climax but it was essential to the plot and sets everything up for a satisfying conclusion. I'm sure other readers will look forward to the sequel just as much as I am.

This is certainly an interesting book about an interesting concept, and readers will want to get to the end of the book to learn how it all panned out. Part of the story may sound a little far-fetched and implausible - although I’m a sceptic, but the following thoughts are surely to come to every reader’s mind: ‘What if this really happen? Could it happen? Maybe it is just possible!’. Chapter 30 puts the ‘implausible’ into context and the reader will be forced to pause and reflect about the complexity of the mind, and how little the ‘paranormal’ is understood. It certainly is a good read, and I hope there will be a sequel to the book.

Great story.
Very easy to read and hard to put down, and have re-read it. Like the way each chapter ended with a question or leaves you wondering. Characters were well defined and I could easily get a mental picture of what I thought each looked like and their place in the plot. The terrorist intervention and the way that all unfolded was brilliant another good little twist. The build up and the thrilling train ride could not put down had to read to the end.
All in all a great effort with latitude for a sequel.

I really enjoyed reading it. It is easy to read, with that must find out what happens content.

A good read. Towards the end I stayed up late to finish it as I didn't want to put it down. It certainly involves quite a few interesting concepts set on the international scene. I personally think it would make a great movie!

In this exciting debut, PD Richmond creates a riveting drama which left me anticipating a sequel. Richmond’s characters are easy to relate to as they are people we know and who could easily be ourselves. My feelings for Adam were confusing as Richmond drew me in to feeling sorry for him as a young boy who is bullied by classmates and parents then grows into an adult who is drawn to evil out of hatred and greed, or is this really Adam? This was both a light read and a compelling story where characters behaviours may not always be consistent, but a page turner none-the-less.

Peter Richmond’s debut novel “The Mind Man” is a really good read. He has managed to fulfil a childhood dream of creating a supernatural thriller based on long-held themes and motifs from his own experience.
Richmond’s prose is based on a skilled use of dialogue, which produces narrative drive, interspersed with multiple third person points of view, depending on which character is seeing the action.
The novel is well paced and takes you from the backwaters of an Australian wheat-farming town, across the world to the West Coast of America, and thence to the Cook Islands, London, Africa, Northern Iraq, Sydney and Boston. I particularly liked the change of scenery that the globetrotting theme demands.
The monotonous Aussie outback contrasts with the rich man’s materialist world in America, as it does, too, with the snow-capped mountains in the North of Iraq.
The characters in the novel are similarly varied, from the main Australian character of Adam, his equally mysterious love interest, Caren, to the ethical American cop, Ted, his flirtatious wife, Sally, the English journalist, Laura, and the scientist Dr Zimmerman to name but a few of them.
Richmond has managed to tie together multiple events, characters, motifs, and plot-lines, without sacrificing the forward movement of the underlying mystery/horror. The ending is particularly clever as it pulls the reader back to the beginning.
While reading this novel the American fantasy novels of Stephen King came to mind. I would recommend it to anyone who would like a fun and thrilling read.

You have subscribed to alerts for Peter Richmond.

You have been added to Peter Richmond's favorite list.

You can also sign-up to receive email notifications whenever Peter Richmond releases a new book.