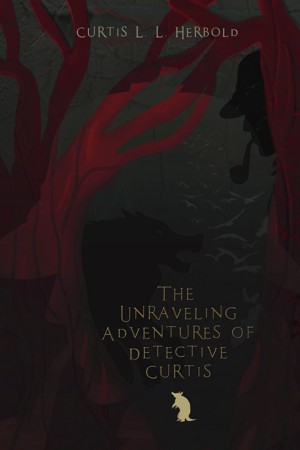 The Unraveling Adventures of Detective Curtis

Detective Curtis is not your average detective. He works with the magic council to solve magical crimes. These crimes are unlike any crimes before. With disappearing water fountains and watchdog ghosts. This is a book you won’t be able to put down and you better watch your back because a ghost could be right behind you! More
Pitch:

Detective Curtis is not your average detective. He works with the magic council to solve magical crimes. These crimes are unlike any crimes before. With disappearing water fountains and watchdog ghosts. This is a book you won’t be able to put down and you better watch your back because a ghost could be right behind you!

Detective Curtis is about to embark on the largest case of his life. However, things go wrong.  Detective Curtis works with the magic council to solve magical crimes. The newest crime is one that will change the detective's life forever. Come join detective Curtis, his friend Nala of the magic council, a sweet homeless boy named Darwen and the reset of the police force as they race to solve a magical case that could be a hundred years old.
Available ebook formats: epub mobi pdf lrf pdb txt html
First 15% Sample: mobi (Kindle) lrf pdb Online Reader
Price: $9.99 USD
Buy Add to Library Give as a Gift
How gifting works
Create Widget
Tags: fiction mystery magic detective
About Curtis L. L. Herbold

Hi, my name is Curtis L. L. Herbold. I am a simple person who is kind, caring, sweet, and an all around great guy. However, my journey has been very difficult as I have autism. However, it is just a minor case. My autism is called, “Asperger’s Syndrome,” which people have been becoming more aware of this particular type of autism as of the beginning of 2017.

I have had a long road and a harsh life. I would not be here today if it weren’t for my grandmother who took me in when I was 5 years old and raised me. I can get bossy, arrogant, argumentative, and quite irritated at times because of this type of autism. However, that is not all I have that has made it as difficult as it has been. I have OCD, ADHD, ADD, Learning Disability, Attachment Disorder, Anger Management, and others that I currently do not remember. Ever since I was 5, it has been an extreme challenge to keep up with everything and everyone.

Right now as I am writing this on August 11, 2017 at 11:00pm at night, I can honestly say at the single age of 29 as of May 2017, I have my OCD limited to organizing and cleaning, nothing else. I have extremely improved my control over the symptoms of my ADD & ADHD. My learning disability is almost non-existent in some areas and in a lot of other areas is not so much of an issue anymore. My anger management, let me put it this way, when I was younger, I would destroy stuff when I got mad without any hesitation. Now, when I get angry, I can usually keep control of myself so that I do not break anything. My attachment disorder no longer exists. In fact, I have developed the philosophy, “If you don’t like me, screw you” attitude, which was developed because of a situation that happened in junior high and high school. As for my ADD & ADHD, I still get hyper, yes, but not so much. If it’s late with family playing games on holidays, I tend to drink soda to relieve my stress. However, this causes me to laugh so much that by midnight or later, I end up making myself sick, if you understand what I mean by that. I have come a long way since school days, and if anyone thinks I haven’t, they can take it up with Andrew Eckman, who could not believe how much I had changed since he last saw me, which was literally graduation of 2007.

My particular autism, however, is a little different. With this particular autism, communication skills are a real problem. At this point, I do not believe I will ever be rid of this problem and will have it with me till the day I die, and I hope I don’t die until old age. However, if I were to go earlier than old age, I would like to die in a fiery car crash so I can at least go out with a bang, LOL. As the TV show “The Big Bang Theory” states in their intro, “It all started with a big bang.” In my case, if I go out earlier than old age, here is my comment, “It all ended in a big bang,” LMBO.

I can also cook as well as bake. I make a Oreo cake that is as rich or richer than a German Chocolate Cake. I call it White Chocolate Double Stuffed Coconut Oreo Cake. I also make a mean made from scratch from no recipe Chicken Bacon Quesadilla.. If I had not gotten a associates degree in computer repair I could have been a chef.

As for the book series I am writing, I found out that I love to write, however, I am not that great at language and never was. I am not doing it for the fame. I am doing it for me so I can say, “Yes I did this.” I despise rich and famous people who become snobby pricks and care only about their money and hair and not the common person. They do not stay true to themselves because they let their money change them. That is why I am going to stay true to my values if I do become rich and famous, no matter what. I remind myself every day that I made this for myself. I look at it this way:

"When I started writing, I was not the best person with language skills, the fancy car, the money, or anything else of value. I never even dreamed of being a “Best Selling” author. I am just living my own life, on my own in a one-bedroom apartment, minimum wage part time job, and paying my dues to society, but I did this without the help of family, friends or government officials like caseworkers. The only help I had was to get my first edited professionally by a freelance editor. To start my journey, I wrote the plot, the story, and everything about the book and its series; I wrote this whole web page, the tools, the covers, and my Facebook page for my series. Everything you see is a…well I guess you could say it’s an image of me, since I have done it all. Even if I do not become rich and famous off the series, at least I get to say I did this, and I am proud of myself for accomplishing what I have, especially considering the challenges that I have had.

I will continue to write because that is what I love, and I will never give up on trying to become a professional author (as of December 8, 2017), despite all the challenges that I have had and will continue to have. If in the end all I have are my books and only my books, I will at least be happy being me and staying true to myself."

That is something I will carry with me forever because it is something that I think most people could only dream of by finding happiness without caring about money or fame. Some people want both, or one or the other. I say, who gives a crap? Rich, famous, or not, at least I will be me and stay me because I do not like being someone I am not, and in my opinion, trying to be someone you are not is a class A “Delusion” in my book. I know; I have been down that path by trying to change myself for someone to try to get her to like me as more than a friend. That was the biggest mistake I have made in my life. I regret it every day and ponder what would have happened if I hadn’t gone down that path. I still do ponder it to this day here and there, but I no longer let it influence my present. I have also only ever had three relationships, and none of them ended so well, so I am currently single as of August 11, 2017 (Now December 8, 2017). I just haven’t found that right one and am still waiting for her. The sad part is, it will probably never happen, and frankly, I am fine with that. Until I do meet her, I will continue improving myself and keep trying to be the best ME I can possibly be because that is all I really can do.

Reviews of The Unraveling Adventures of Detective Curtis by Curtis L. L. Herbold

Would you like to favorite Curtis L. L. Herbold?

You have been added to Curtis L. L. Herbold's favorite list.