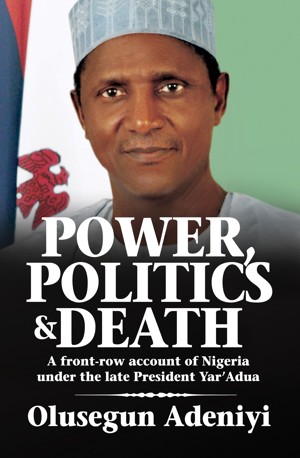 Olusegun Adeniyi, a former editor of THISDAY and currently chairman of its editorial board, was appointed Special Adviser to the President on communications on May 30, 2007, a position he held until May 5, 2010, when his boss, President Umaru Musa Yar’Adua died.

Author of four books (The Last 100 Days of Abacha, Fortress on Quicksand, Abiola’s Travails, and Politricks), he is a founding member of the National Stakeholder Working Group of Nigeria Extractive Industries Transparency Initiative (NEITI) and Fellow of the Nigeria Leadership Initiative (NLI). He conducted research on the factors that shape incumbent presidential elections in Africa at Harvard University’s Weatherhead Center for International Affairs, where he recently completed a one-year fellow’s programme.

Review
Danny Angbashim reviewed on on Jan. 16, 2012
(no rating)
Much of what was written was already in the public domain. Segun was generous in discrediting AGF Aandoaakaa (the AGF was a disreputable guy, no doubt)throughout the narrative but was conveniently silent about the despicable roles played by people like Tanimu Yakubu and Abba Ruma who kept misinforming the public that they spoke with the President almost every hour (even when the same President would, strangely, not speak with his VP). They planted stories in the press about the President running up staircases in Saudi Arabia, playing with grand-children in the villa, walking round the villa lawns, desiring to speak with everyone else except Jonathan, etc.

Curiously, Segun denies the existence of the famous 'cabal' in the presidency then. The Presidential motorcade was driven through the streets of Abuja on some occasions to 'shock and awe' the sitting Acting President. The unprecedented manner the military was mobilised out (what was the purpose if not to send unmistakable signal to Jonathan and his aides that someone/clique else was in charge)on the night the President returned without the acting C-in-C's knowledge, yet even that Segun unconvincingly tried to explain away. Or is it the securing of the Presidential seat from 'intruder' in the Council chambers by security details. These and many more were clearly well coordinated events by an equally well organised power clique. Who were the faces behind these sordid events? Segun is loudly silent about them.

In this book Segun cleverly edited the '...President Yar'Adua DIRECTED Vice-President Jonathan...' portion from the excerpts of the press release he read in the morning the President returned. By his admission as at the time of this release, he had neither spoken nor seen Yar'Adua. In fact he hadn't even the faintest idea about his condition then. So clearly he was acting on someone/clique's instruction (and not Yar'Adua). For him to have consented to dish out such strong and definite but clearly illegal instructions to the Acting President indicates that he believed more in the cause (whatever it was) of this faceless group than the well-being and the office of the president of his country! How pathetic. The Segun I have read severally would have been more circumspect and a bit ambiguous in the release if he was not acting on clear orders from somewhere.

I believe he marred an otherwise highly enlightening book with episodes of desperate attempt at extricating himself and protecting group interest from the ugly roles he may have played (perhaps inadvertently) in those days.

One is tempted to believe that he was truly the 'intellectual' face to the cabal in those dark days of our nation's history. But he's human after all.

(reviewed 22 days after purchase)
Ifeatu Ifeatu reviewed on on Jan. 10, 2012
(no rating)
As an insider’s account, Segun Adeniyi provides little extra information in this book that is not already in the public domain and as such, the book is in some sense an anti-climax. Leading to the presentation of the book I came away with the impression that as in other situations where a government insider decides to write a book, it will be a no holds barred document that tells us who played what role in events. Segun Adeniyi however found it convenient to keep the identities of some important characters hidden. I also see a good section of the book as an attempt at self-image laundering by the author especially regarding events surrounding his addressing the acting president as the Vice President. To me, in view of subsequent happenings, this is really unnecessary except perhaps there are those who he still thinks are peeved and who he is trying to court. Lastly, I noticed two dates that are wrong and I will attribute this to the “printer’s devil” as the date in the book and the actual dates of the events are so far apart that this could not have been a mistake. The book is an easy read and for his fans, myself inclusive, there is always the joy of reading an extended writing by Segun Adeniyi, and I found it difficult to putdown the Kindle edition I bought having decided it was best value for money. I eagerly await the revised edition of “Last 100 days of Abacha” and the short book or pamphlet he promised to write on Dim Chukwuemeka Odumegwu Ojukwu. I am sure it will be quintessential Segun Adeniyi. Welcome back!

Nice read, even tough the style was more of a descriptive method of writing. He keeps referring to Yar'aduas handlers as if he Adeniyi was not one of those handlers. He attempts to keep a distance from events around Yar'adua as if to exonerate himself from what was happening, an aloof stance which sometimes smacks of hypocrisy and arrogance. A sort of "me" versus "them" argument. Though he strives in the book to make us understand how close he was to Yar'adua.

A good read, but not as intellectual, insightful and rigorous as I expected it to be. More of a story than an intellectual exercise.

(reviewed 23 days after purchase)
Garba reviewed on on Jan. 5, 2012
(no rating)
An excellent insight Segun . I wish we had this book released before the 2011 general elections . The real Cabal was actually Jona and his region of ministers . May God forgive us for our ignorance . All this while we never knew it was the late president that needed our prayers more than the one alive today .

(reviewed 22 days after purchase)
nelson abiche reviewed on on Dec. 19, 2011
(no rating)
Thank you for the insight segun.excellent book.

You have subscribed to alerts for Olusegun Adeniyi.

You have been added to Olusegun Adeniyi's favorite list.

You can also sign-up to receive email notifications whenever Olusegun Adeniyi releases a new book.