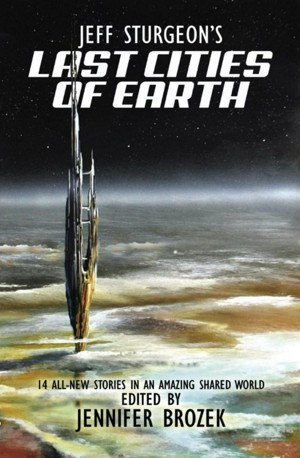 Jeff is a northwest artist known for his beautiful, award-winning metal paintings. Jeff's career spans over thirty years, coming up through the ranks as a young fan artist in the 80's to being hired in the first wave of computer game artists in the late 80’s and early 90’s. A long career in the 90's as an artist, animator, concept artist, lead artist, game designer and art director followed most notably for Electronic Arts. He continued to paint and display his work at science fiction conventions around the country and created new cover and interior work for clients such as Harper Collins Publishing and NASA JPL.

Jeff left the game business behind and went to painting full time with aluminum as his new canvas though he did not give up traditional canvas completely. Through the new millennium Jeff's work became nationally known with increased appearances as an exhibitor, guest, panelist and Guest of Honor at conventions around the country and as an award-winning illustrator and cover artist.

Jeff's work is much sought after by art collectors whether one of his classic SF/ astronomical pieces or his beautiful renderings of the American west. The last few years Jeff has been concentrating on his shared world The Last Cities of Earth with a anthology which includes new fiction by many of the best-selling award-winning authors in the business and new art by Jeff. The project can be followed at www.jeffsturgeon.com.

You have subscribed to Smashwords Alerts new release notifications for Jeff Sturgeon.

You have been added to Jeff Sturgeon's favorite list.

You can also sign-up to receive email notifications whenever Jeff Sturgeon releases a new book.