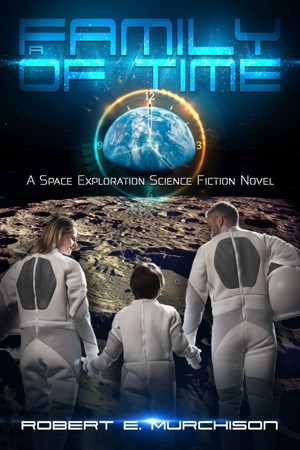 A Family of Time: A Space Exploration Science Fiction Novel

The MacMurchaid family, which consists of father Robert, mother Denise, and children Tony, Troy, Kris, and Nicole, is suddenly thrust into the spotlight when they are chosen for the mission of being the first family sent into space. Their training and their trip into space—as detailed in this book and supplemented with real-life historical space program tidbits—go smoothly. But soon after the family members are placed into hibernation on the moon, war breaks out on Earth, and the family is abandoned and presumed dead. The MacMurchaids awake over 455 years later, facing a new world and new challenges. Will the knowledge and training they were fed during hibernation allow them to overcome these challenges? Read and find out.
Available ebook formats: epub
First 20% Sample: epub
Price: $3.99 USD
Buy Add to Library Give as a Gift
How gifting works
Create Widget
Tags: space fiction science fiction space exploration family life novel outer space books adventure book kids moon fiction moon novel science fiction colony space exploration book space novel
About Robert E. Murchison

ROBERT E. MURCHISON was born and mostly raised in Muskogee, Oklahoma. Growing up, his parents and grandparents taught him to appreciate family and history, which are themes that play out in his writing. The main characters in Robert’s novel A Family of Time: A Space Exploration Science Fiction Novel are based on his four children and his late wife, who encouraged him to write the book. He and his children are registered members of the Cherokee Nation of Oklahoma. And Robert is a veteran of the United States Air Force, where he served as a launch crew member for the Titan II Intercontinental Ballistic Missile. His other pursuits have included being a substitute teacher, a cub master, a scoutmaster, and a historian and honor guard member for Carnie Welch American Legion Post 27.

Reviews of A Family of Time: A Space Exploration Science Fiction Novel by Robert E. Murchison

You have subscribed to Smashwords Alerts new release notifications for Robert E. Murchison.

You have been added to Robert E. Murchison's favorite list.

You can also sign-up to receive email notifications whenever Robert E. Murchison releases a new book.