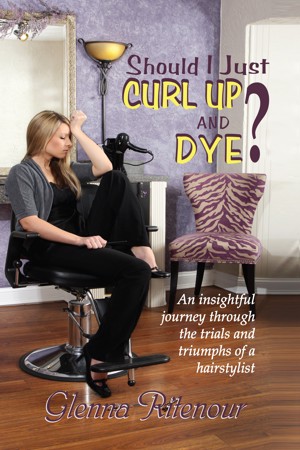 Should I Just Curl Up and Dye?

The amazing provision of God through the many troubled times and life lessons are revealed in the author's personal stories of trial and triumph. Her strong testimony and insight will bring hope and encouragement to any reader.

Born February 20, 1962, in Titusville, Florida, the Ritenours had plans of naming their baby girl Stacey Lynn. However, during her mother’s labor, her father was watching Colonel John H. Glenn Jr. blast off. Since Col. Glenn was the fi rst man to orbit the earth, they agreed to name her Glenna Michelle. As the news traveled of Glenna being the seventh child born to Mr. and Mrs. Edward C. Ritenour and possibly the fi rst girl named after
the famed astronaut, along came the Star Advocate News to interview the parents and write history more than 40 years ago!

Glenna Ritenour is today mother of fi ve children and stepmom to a sixth. For over 20 years she has made a career as a hairstylist and salon owner. To Glenna this has been a personal ministry of
sharing and teaching, though her “classroom” may be a salon chair. Owning her business is a blessing, she says, because she can share God’s love with her clients in no concern of response
from an employer.

Bradenton, Florida is home for Glenna, and nearby Anna Marie Island is where she treasures frequent refl ective alone times with God. Glenna takes
pictures of things there that inspire her writing. Although not shown in this book, some
are on her website: www.glennaritenour.webs.com.

Glenna began writing many years ago, but only in more recent time have stories in this book been
developed for sharing in print. As she feels led by the Lord, she plans to continue writing.

You have subscribed to alerts for Glenna Ritenour.

You have been added to Glenna Ritenour's favorite list.

You can also sign-up to receive email notifications whenever Glenna Ritenour releases a new book.