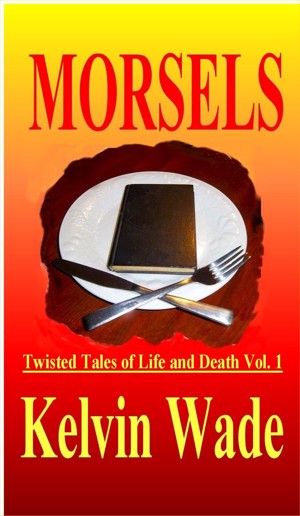 By Kelvin Wade
What if you made a rash decision right before the calvary arrives? Imagine a vampire that hates the taste of blood. What if a murdered battered woman decided to fight back? Ever seen a human zoo? Pssst...cows can fly. What would you give in exchange for your dreams coming true? What if that derelict on the bus is God? Morsels serves up fifteen twisted original tales that you won't soon forget. More
Morsels Vol. 1 serves up fifteen original twisted short stories. It's a Twilight Zone-ish genre blending ride with hairpin turns. The book starts off with "Greenlight" in which hardware store owner Harry O'Henry has a big problem. He has a wife, kids, a mortgage and a failing business due to the double whammy of a bad economy and a bad gambling problem. He finds a mysterious phone number on Craigslist that promises to solve his problems. It's a phone call he can only hope he lives to regret.

Kelvin Wade is a 45 year old freelance writer/author. He has written an opinion column, "The Other Side" for the Daily Republic in Fairfield, California for 19 years. He has also done technical writing, newsletter design and production for various homeowner associations from Pacific Grove to Roseville, California. He also currently writes for the iPinion Syndicate.

He helped co-found the Bay Area Survivors of Suicide and worked with the group for years before rolling it into the national organization. He wrote a column on dealing with the aftermath of suicide for the group's newsletter.

He got his start writing for the Daily Republic in junior high when he wrote a column called "The Bear Facts" reporting on his school's (Grange Grizzlies) activities.

He resides in Northern California with his very significant other, Catherine, and their three "kids", Beagle brothers Tyson and Theo and frisky Maltoodle, Rafi.

The Morsels Trailer
This is a video trailer for my first book, Morsels: Twisted Tales of Life and Death Vol. 1. After watching the trailer, please download the book absolutely free!

You have subscribed to alerts for Kelvin Wade.

You have been added to Kelvin Wade's favorite list.

You can also sign-up to receive email notifications whenever Kelvin Wade releases a new book.