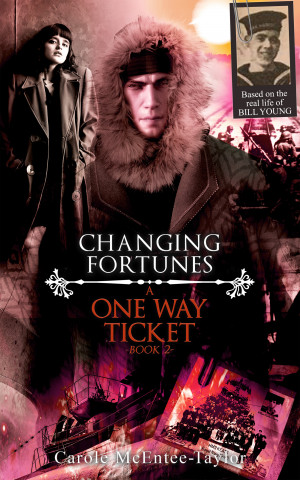 Inspired by the true story of Bill Young, A One Way Ticket is a four book series mixing fact and fiction. Photos are included in every book and Bill’s true story is at the end of book 4, Journey’s End. More
Bill is now on HMS Keats and has fallen in love. But his nightmares are growing worse as does his feeling that he is jinxed and anyone who gets close to him gets hurt. His sister Nora’s nightmares are only just beginning but then she meets Hank and dares to believe that her life is about to change for the better.

Francis agrees Levi is wasting his talents working at Trent Park so he receives special training and is sent to Germany to find German scientists before they are kidnapped by the Russians and Americans. Levi is convinced that the Nazis will get away with their crimes so has no qualms when he is asked to kill a biological weapons specialist. But things are not what they seem and his search leads to a dangerous change of direction.

Suspecting Jacob is a British spy Clemens uses him to ask for Allied help with the July 20 plot to kill Hitler. Having fallen in love Jacob has married Clemens’ daughter Eva and after the plot fails Clemens asks Jacob to take Eva to the Allies. They reach Calais but are separated and before Jacob can do anything Eva is evacuated back to Berlin.

I write military history, historical fiction and memoirs and sometimes a mixture of all three. I am also a ghost writer of novels and memoirs.
My non fiction, published by by Pen and Sword Books Ltd, include Herbert Columbine VC, Surviving the Nazi Onslaught, A Battle Too Far, Military Detention Colchester from 1947, The Battle of Bellewaarde June 1915, From Colonial Warrior to Western Front Flyer, The History of Coalhouse Fort and A History of Women’s Lives in Scunthorpe.
I have also written a biography of John Doubleday to be included in his book: The Work and published The Weekend Trippers and My War and Peace myself. I am always on the look out for new military memoirs to publish. If you would like to know more please visit my website.

My spiritual books are The Re-Enlightenment and The Holiday From Hell.

About the Series: A One Way Ticket

Inspired by the true story of Seaman Bill Young during and after WW2, A One Way Ticket is a four book series mixing fact and fiction.

Photos are included in every book and Bill’s true story is at the end of book 4, Journey’s End.

Also in Series: A One Way Ticket

You have subscribed to Smashwords Alerts new release notifications for Carole McEntee-Taylor.

You have been added to Carole McEntee-Taylor's favorite list.

You can also sign-up to receive email notifications whenever Carole McEntee-Taylor releases a new book.