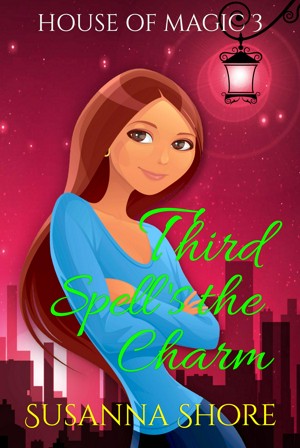 By Susanna Shore
Phoebe’s night out with her housemate Luca ends with a dead body. The victim has clearly been killed by a vampire, and the evidence points at Luca. To prove his innocence, Phoebe and Luca set out to solve the death. Has it to do with the leader of London vampires? Mystery is afoot, but maybe the third spell turns out to be the charm. More
Fire wasn’t exactly the intended outcome of a water spell, but with me, it was sadly inevitable.

Phoebe’s new life as a mage hasn’t had an auspicious start. No matter how hard she tries, her spells fail spectacularly. How is she to impress her boss, Archibald Kane, if she keeps setting her hair on fire?

Her problems with magic become trivial when a night out ends with a dead body. The victim has clearly been killed by a vampire, and the evidence points at Phoebe’s housemate Luca.

The leader of London vampires, Morgan Hunt, is convinced Luca is guilty. To prove his innocence, Phoebe and Luca set out to solve the death. Was the victim random, or has an old enemy of Hunt’s returned? And how are they to unearth the enemy when Hunt has done his best to hide his past?

Phoebe is an expert in digging up old things, but facing a powerful foe would be easier, if she had a hang of her spellcasting too. Luckily she has magical friends she can count on. And maybe the third spell turns out to be the charm after all.
Available ebook formats: epub mobi pdf lrf pdb txt html
First 10% Sample: epub mobi (Kindle) lrf more Online Reader
pdb
Price: $3.99 USD
Buy Add to Library Give as a Gift
How gifting works
Create Widget
Tags: urban fantasy magic cozy mystery paranormal fantasy paranormal mystery vampires and werewolves urban fantasy mystery witch and wizard fantasy adventure fiction cozy fantasy
About Susanna Shore

About the Series: House of Magic

Phoebe Thorpe, an assistant to a London antiques dealer, is about to have her life changed when she plunges into a world of magic.

Also in Series: House of Magic

Reviews of Third Spell's the Charm. House of Magic 3. by Susanna Shore

You have subscribed to Smashwords Alerts new release notifications for Susanna Shore.

You have been added to Susanna Shore's favorite list.

You can also sign-up to receive email notifications whenever Susanna Shore releases a new book.