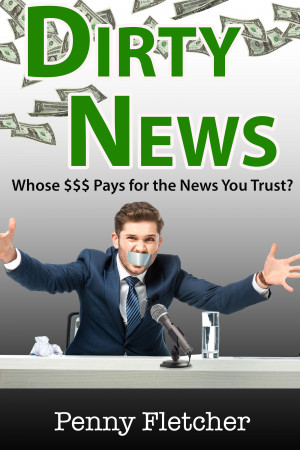 Dirty News: Whose $$$ Pays for the News You Trust

A print journalist and editor for more than 38 years, Penny Fletcher has written more than 12,000 news stories, features, and editorials and earned more than 20 press awards from The Florida Press Association and Community Papers of Florida. As a reporter and Bureau Editor during several takeovers, she has seen and felt many of the changes she writes about in Dirty News first-hand. After leaving the newsroom, she made an in-depth study of the Supreme Court, Congressional, and FCC rulings that have led to the disinformation, commentary and biased reports passed off as news over the last 25-or-so years.

While working full-time as a journalist for 'Sunbelt Newspapers' and was a columnist for 'The Tampa Tribune,' on the side, she wrote for magazines as varied as 'Gulf Coast Fisherman,' 'Today’s Christian Woman,' and 'True Story'. She also freelanced as an editor for Amazon’s first publishing venture, BookSurge, where she transitioned from Associated Press to Chicago style in both American and British English, and still operates an editorial service on her website www.pennyfletcher.com where she has edited more than 250 books. Until 2021 she also gave once-a-week classes in creative fiction writing at The Center 4 Lifelong Learning in the nearby retirement community of Sun City Center.

She self-published a romantic suspense novel, 'The Sumerian Secret,' in 2016 and was traditionally published by Sunbury Press of Mechanicsburg, Pennsylvania, in 2021, in the spiritual genre, with 'True Stories of Help from the Other Side'.

A native of the Jersey Shore, during her first marriage, she lived in many states and in Europe as a military dependent, but has now resided in Florida for more than 40 years. The mother of four children and two “children from another mother,” she also adopted and raised a grandchild who is now also grown. She says one of her most significant accomplishments is helping start two shelters for victims of domestic abuse, after having survived it herself, before meeting her late husband in 1981. Her first book was a first-person account of domestic abuse, 'If I Should Die Before I Wake'. It was published by the former Rainbow’s End Publishing Company of Baden, Pennsylvania, in 1992, and is still available online in used copies.

She is currently press-credentialed by the Florida Freelance Writers/ Writers & Editors Network. Her blog, 'Americans for Truth in News,' is updated weekly on her website where she talks about history, current events, politics─ and of course, news.

Reviews of Dirty News: Whose $$$ Pays for the News You Trust by Penny Fletcher

You have subscribed to Smashwords Alerts new release notifications for Penny Fletcher.

You have been added to Penny Fletcher's favorite list.

You can also sign-up to receive email notifications whenever Penny Fletcher releases a new book.