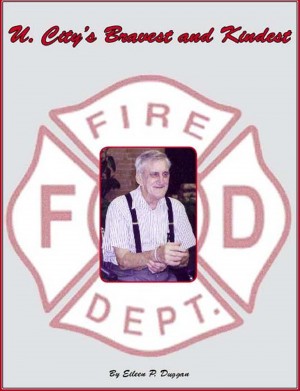 U. City's Bravest and Kindest

By Eileen P. Duggan
Rated 5.00/5 based on 1 reviews
George Nieman, an elderly developmentally challenged newspaper vendor, was found one morning on a suburb’s main drag, stabbed multiple times in the chest and throat. The depth of devotion of University City’s firefighters to George soon became apparent to the whole community. U. City’s Bravest and Kindest tells the moving true story of the UCFD’s 50-year friendship with George.

Eileen P. Duggan is a freelance journalist, writer and editor based in St. Louis, Missouri.

Her literary musical mystery novel, "The Not-Ready-for-Juilliard Players," was published in April 2016 by Rocking Horse Publishing. It is available in paperback and Kindle editions on Amazon, on request at any bookstore, and off the shelf at The Book House in the St. Louis area.

Duggan is shopping to agents and publishers another novel written during the 2013 National Novel Writing Month and is working on a detective series.

The Marathon From Hell (story of the 1904 Olympic Marathon). Marathon and Beyond Magazine, 2004.
www.marathonandbeyond.com/choices/duggan.html

Sorry, I forgot the stars.

(review of free book)
C. J. Berry reviewed on Jan. 16, 2013
(no rating)
This is a solid, well-researched piece of journalism. You get to know everybody involved on a human level. Duggan doesn't pump up anything for maudlin drama. She builds up the atmosphere, the people's personalities, the stories within the story very naturally. And no typos!

You have subscribed to alerts for Eileen P. Duggan.

You have been added to Eileen P. Duggan's favorite list.

You can also sign-up to receive email notifications whenever Eileen P. Duggan releases a new book.