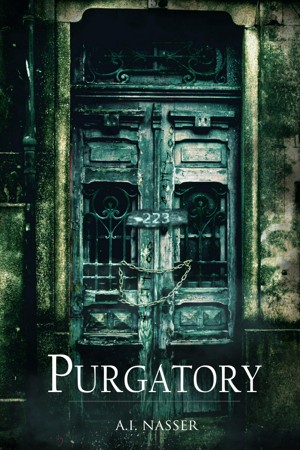 By A. I. Nasser
When a serial killer is found dead in the woods outside the quiet town of Darville, with scratches across his face and his head impaled on a shovel, Patrick Lahm and Jimmy Frey are called back to Connecticut. Living as fugitives and constantly moving from place to place, it is a call they have been praying for in their tedious search for the monster that started it all and tore their lives apart. More
But Darville is not as peaceful as it seems, and the sins of the many cannot remain hidden forever. Patrick and Jimmy quickly realize that, despite their best laid plans, things can go terribly wrong. As darkness descends on the small New England town, the evil that had once brought misery upon the guests of the Kurtain Motel, finds its place amongst the wicked and promises them salvation.

All they have to do is confess.
Available ebook formats: epub
Price: $3.99 USD
Buy Add to Library Give as a Gift
How gifting works
Create Widget
Tags: thriller horror suspense paranormal supernatural ghost stories horror fiction evil spirits scary stories scare street
About A. I. Nasser

At the age of four, Ahmed I. Nasser’s parents decided that the best way to keep a hyperactive child occupied was to teach him how to read and constantly bombard him with books. Since then, the world of imagination has constantly consumed him. He quickly decided that the only way to feel fulfilled was to spend his time writing one story after the other, even opting out of a career as a pediatrician, despite ten years of struggling through med-school.

Influenced by Stephen King, Neil Gaiman and Terry Pratchett, he has been writing since the age of 12 while travelling the world with his family. Now, finally settled in Egypt, he divides his time between teaching Middle School English Literature and finding the best ways to scare his family and friends.

Learn more about A. I. Nasser

Reviews of Purgatory by A. I. Nasser

You have subscribed to alerts for A. I. Nasser.

You have been added to A. I. Nasser's favorite list.

You can also sign-up to receive email notifications whenever A. I. Nasser releases a new book.