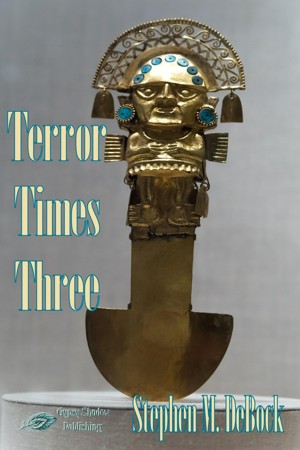 Three tales testify to horror’s presence in varied venues of time and place. More
NIGHT SWEATS: Geoff has covered over a horrible crime he committed as a youth. But sometimes the past just won’t stay buried. MAYA: An exotic Latin beauty brings her American lover back to her Mexican village to receive her family’s blessing. His welcome exceeds his expectations. But it includes something he never unexpected. SEED: When all the women in the pre-colonial village become pregnant overnight, the only explanation is that a witch lives among them. The village pastor, son of a witchfinder, is tasked to find her. Multiple accusations and executions follow. But when all the babies are born deformed on the same day, and die that same night, the panicked villagers demand an accounting for their pastor’s failures.
Available ebook formats: epub mobi pdf lrf pdb txt html
First 15% Sample: epub mobi (Kindle) lrf more Online Reader
pdb
Price: $3.94 USD
Buy Add to Library Give as a Gift
How gifting works
Create Widget
Tags: murder short story collection historical horror stephen m debock gypsy shadow publishing exotic romance
About Stephen M. DeBock

Stephen DeBock writes on just about any topic but for fun concentrates on sci-fi/fantasy adventure and supernatural fiction.

As a teenager, Steve would entertain (and frighten) the neighborhood children by retelling them stories from E.C. horror comics like The Crypt of Terror. As a middle school teacher, he continued the tradition by reading his students a horror story to initiate the school year. Now retired, he has time to write his own stories.

His first writing success came as a high school senior, when a 25-word essay won him an all-expenses-paid vacation in Alaska. Upon his return he entered the Marines and was chosen to serve in the President’s Honor Guard. Vignettes from that venue have appeared in American Heritage magazine and in various newspapers.

Upon leaving the Corps, Steve worked days, went to college at night, and spent weekends earning a private pilot’s certificate. A flying narrative he wrote was published in AOPA Pilot Online.

During his teaching career, Steve garnered an award by the State of New Jersey for his work in consumer education. He served briefly as a consultant for Consumers Union and contributed to essays in Time magazine, ABC’s World News Tonight, and CNBC.

Having founded and later sold a video rental business, Steve and his wife also sold their home and lived for three years aboard a 42-foot sea-going trawler yacht. An article describing one of their summer cruises was sold to Living Aboard magazine.

Steve has written newsletters for both private and non-profit organizations; a flash fiction story for the children’s magazine Spider; and the text for a coffee-table book on one of America’s most-collected living artists: The Art of H. Hargrove.

He and his wife Joy live in Hershey, Pennsylvania.

You have subscribed to Smashwords Alerts new release notifications for Stephen M. DeBock.

You have been added to Stephen M. DeBock's favorite list.

You can also sign-up to receive email notifications whenever Stephen M. DeBock releases a new book.