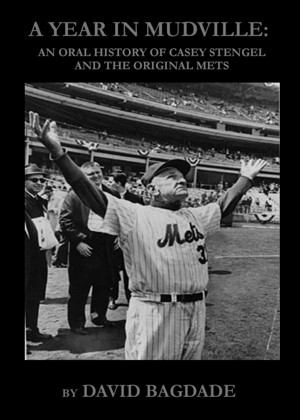 A Year in Mudville: An Oral History of Casey Stengel and the Original Mets

A Year in Mudville: An Oral History of Casey Stengel and the Original Mets is the first comprehensive work devoted to the 1962 New York Mets, the worst baseball team of the twentieth century. The Original Mets, while unquestionably bad, remain one of the most beloved teams of any era, and this book tells the Mets' unbelievable story through the words of participants and witnesses.

David Bagdade is an author and musician from Indianapolis. Working as a freelance writer, he has contributed dozens of features and reviews to publications such as Country Standard Time, the Independent Music Guide, Bluegrass Music News, Bluegrass Music Profiles and The Portrait.

Mr. Bagdade’s first book is “A Year In Mudville – An Oral History of Casey Stengel and the Original Mets,” a narrative-driven look at the 1962 New York Mets, widely regarded as the worst baseball team of all time. This work examines how and why the team was created, the people involved with the first season (not only players, but officials, broadcasters and fans), and why the Original Mets are such a fascinating topic more than four decades after their debut season. As with any oral history, “A Year in Mudville” depends heavily on the actual words of the participants and offers a compelling look at a legendary collection of characters and events.

Mr. Bagdade is also an accomplished performer and recording artist. He has recently released a new CD, “Rocky Shores of Home,” a collection of original and traditional Celtic music performed on various stringed instruments.

You have subscribed to alerts for David Bagdade.

You have been added to David Bagdade's favorite list.

You can also sign-up to receive email notifications whenever David Bagdade releases a new book.