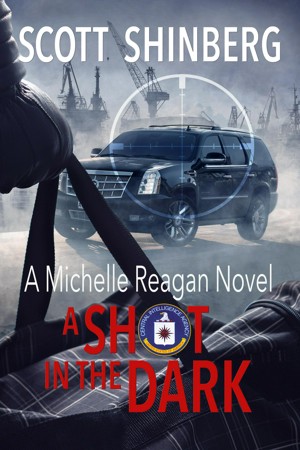 A Shot in the Dark

Wanted by both cartels, Eden must determine Christina’s true motivation: is it to return home to the US, or is she a double-agent for the cartel run by her lover? When cornered by a cartel’s soldiers, Eden must make the tough choice: attempt a high-risk rescue of Christina, or flee alone to save her own life.
~~~
EVOLVED PUBLISHING PRESENTS a non-stop thrill ride with action galore, insights into covert action tradecraft, and descriptions of exotic locales around the globe so detailed you can smell them. ‘A Shot in the Dark’ is perfect for fans of Tom Clancy, Robert Ludlum, Dean Koontz, Brad Meltzer, and Len Deighton. [DRM-Free]
~~~
BOOKS BY SCOTT SHINBERG:
> Michelle Reagan – Book 1: “Confessions of Eden”
> Michelle Reagan – Book 2: “Directive One”
> Michelle Reagan – Book 3: “Fly by Night”
> Michelle Reagan – Book 4: “Sargon the Third”
> Michelle Reagan – Book 5: “A Shot in the Dark”
> Michelle Reagan – Book 6: “Kill Box” [Summer/Fall 2022]
~~~
MORE GREAT THRILLERS FROM EVOLVED PUBLISHING:
> “The Pisa Affair” by Kent Swarts
> “The Syndicate-Born Trilogy” Series by K.M. Hodge
> The “A Point Thriller” Series by Jeff Altabef
> “The Oz Files” Series by Barry Metcalf
> The “PI Kowalski” Series by Chris Krupa
Available ebook formats: epub mobi pdf lrf pdb txt html
First 15% Sample: epub mobi (Kindle) lrf more Online Reader
pdb
Price: $4.99 USD
Buy Add to Library Give as a Gift
How gifting works
Create Widget
Tags: cia spy thriller military thriller covert operations cia assassin espionage thriller
About Scott Shinberg

Scott Shinberg has served in leadership positions across the US Government and industry for over twenty-five years. He has worked in and with the US Air Force, the Department of Homeland Security, the Federal Bureau of Investigation, and most “Three-Letter Agencies.” While in government service, he served as an Air Force Intelligence Operations Officer and a Special Agent with the FBI. He lives in Virginia with his wife and sons.

About the Series: Michelle Reagan

Is the “Michelle Reagan” series drawn from today’s headlines, or are the headlines drawn from what little is visible of code name Eden’s footprints?

Reviews of A Shot in the Dark by Scott Shinberg

You have subscribed to Smashwords Alerts new release notifications for Scott Shinberg.

You have been added to Scott Shinberg's favorite list.

You can also sign-up to receive email notifications whenever Scott Shinberg releases a new book.