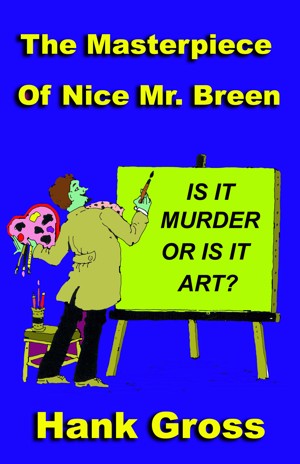 The Masterpiece of Nice Mr. Breen

By Hank Gross
Is it murder or is it art? Mr. Breen, drug dealer and frustrated artist, comes up with a stroke of genius-he'll create a multimedia masterpiece by murdering people in a geometric progression-1,2,4,8,16 and so on, peaking at 256 and then heading down toward 1 again to create a diamond shape. Moreover, he'll commit many of these homicides on a live television talk show. Comic fun.

I have been a writer and editor for over 40 years, beginning in New York City in the 60's, where I freelanced for various magazines and worked as an editor at the National Examiner tabloid newspaper. I also did research and writing for the Reader's Digest (Hell's Angels, Motorcycle Safety) and flew to Louisville to interview (in poetry) Cassius Clay before he won the title and became Ali. His mother was the sweetest woman and made the best potato salad I've ever had.

I have had novels and non-fiction published by major publishers such as Ballantine, World, Arbor House, Peter Pauper Press, and William Morrow, as well as many short stories and articles in major national publications, such as "The Boy Who Ate New York" in the National Lampoon, 1991. (This can be read online at my website, http://www.hankgross.com. I have also taught English and writing to students from Asia, Africa, and Latin America.

I studied street photography with Randall Warniers at MIT, as well as figure photography. I won first prize in the December 1995 Popular Photography contest and was later profiled in the magazine (August 1997). Recently, I have taken up painting (acrylics), which can be viewed on my website.

You have subscribed to alerts for Hank Gross.

You have been added to Hank Gross's favorite list.

You can also sign-up to receive email notifications whenever Hank Gross releases a new book.