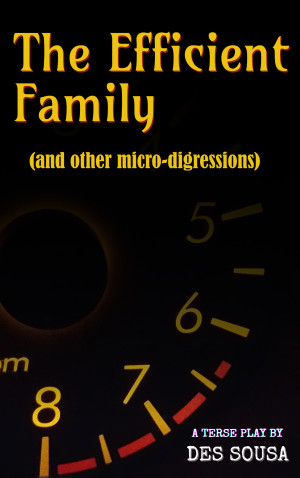 The Efficient Family (And Other Micro-Digressions)

By Des Sousa
It’s a matter of life, death, and doing your homework. The Efficient family always gets things done on time. But can they organise and get to their matriarch's funeral in less than ten minutes? (and other very short plays). More
The second Mr. Efficient stops complaining that the news in brief isn’t brief enough, his daughter arrives with terrible news. Grandma Efficient is dead!
Can they organize a funeral on time without falling behind schedule? Of course, they can! They are the Efficient family.
Can they make it to the funeral in one piece? Well, let’s just say, junior falls out of the car on the way.
Will there be a discount for a second coffin for the boy? Or will he survive? And most importantly, will the remaining Efficient’s get their work and homework done on time
In addition, we have other very short plays, including Ted talk-style efficiency tips, a drawing and a cartoon arguing about email, the Loch Ness Holiday going on holiday, and more...
Available ebook formats: epub pdf
First 8% Sample: epub
Price: $12.99 USD
Buy Add to Library Give as a Gift
How gifting works
Create Widget
Tags: wales business satire self help time management speeches efficiency movie script theater play comedy script
About Des Sousa

As a child, Des Sousa skipped the "about the author" pages and went straight to the stories. I suggest you do the same. But, curious minds are welcome to read along, if you like. More detailed snippets about his life are covered in the "about the author" pages of Sousa's books.
Des Sousa loved to watch films from a young age and spent many years as an independent filmmaker. Sousa used to walk into a festival not knowing what it was, just because a film was there. Sousa heard filmmakers of all kinds, from political to artistic to purely commercial, tell about how they made their movies. Hearing these stories inspired "The Slimebag Project."
Sousa lived in five countries. The first two may appear in later plays. The third, and strangest, was the United Kingdom.
Des Sousa's first job in the UK was trainee hairdresser. No, things were not as violent as they are in "Rinsed In Blood", but the clients liked to gossip and the friendly atmosphere inspired the character interaction. Unfortunately, he left that job due to an illness. (What illness could prevent you from cutting hair? Well, warts. No one wants to give those to customers when you wash their heads, now do they?).
Sousa also tried web design for a time. And running his own companies, trying to make films, taking photos, even designing websites for clients, and getting locked in a noisy underground office, helped inform him of the world behind "Under Quiet Neath."

You have subscribed to Smashwords Alerts new release notifications for Des Sousa.

You have been added to Des Sousa's favorite list.

You can also sign-up to receive email notifications whenever Des Sousa releases a new book.