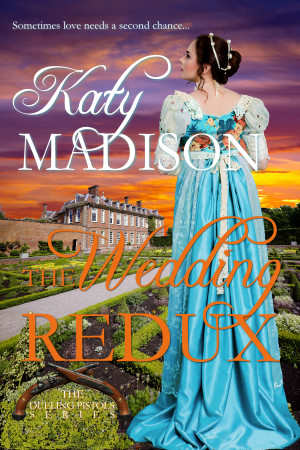 By Katy Madison
Felicity wants control over her life. Never again will she succumb to the charm of a man like Tony who refused to marry her when she became pregnant and has never asked about his son. But now he's back and playing havoc with her senses.
Major Sheridan doesn't understand why his fiancee jilted him and married another man while he lay bleeding on a battlefield. But he's determined to get answers. More
Returning from the Peninsular war disillusioned both by men's violence and the infidelity of women, Major Anthony Sheridan finds himself engaged in duel. But he's only mildly interested in the tale of the cursed pistols—weapons that will reportedly bring the winner true love. He gave up on romance when his fiancee, Felicity Greystone, married another man while he lay bleeding on a Spanish battlefield. Yet a chance encounter with the now-widowed Felicity Merriwether arouses in Tony a desire he'd vowed never to feel again...
As far as Felicity is concerned, Tony abandoned her and left her pregnant with his child, a child badly treated by the unkind older man who married Felicity in her time of need.
Their son Charles is desperate to know who his real papa is. When Tony shows up again like a bad penny, she finds the flames of her desire were never extinguished. She wishes to be far, far away from his devastating charm, but how can she deny her son a relationship with his father? In fact, she finds she is pleased by Tony's attention to her—despite the bad blood between them. But the rift will never mend unless they learn to trust each other again...
Available ebook formats: epub mobi pdf lrf pdb txt html
First 50% Sample: mobi (Kindle) lrf pdb Online Reader
Price: $3.99 USD
Buy Add to Library Give as a Gift
How gifting works
Create Widget
Tags: mystery soldier duel second chance secret baby reunion romance
About Katy Madison

Also in Series: The Dueling Pistols

Reviews of The Wedding Redux by Katy Madison

You have subscribed to alerts for Katy Madison.

You have been added to Katy Madison's favorite list.

You can also sign-up to receive email notifications whenever Katy Madison releases a new book.