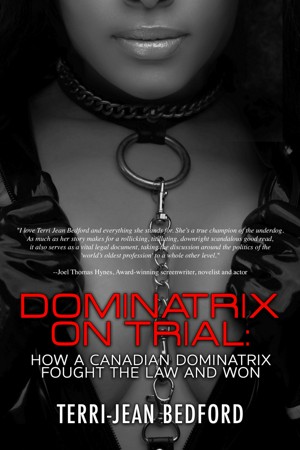 Born into abject poverty, this bi-racial girl was placed into a foster home at six, where she was abused. She was later moved into various children’s homes and lived there until she was 16, when she left to make it on her own. She survived by working numerous unskilled jobs, until she entered the world of prostitution.

A few years later she was at the center of Bedford vs. Canada, a five-year constitutional challenge to Canada’s sex trade laws. The Supreme Court vindicated her struggles. A mother and grandmother, she still advocates and writes for sex worker rights. Despite her at times heart-breaking story and declining health, she says she is going out a winner.

She remains a vocal advocate for civil rights and the disenfranchised. She has been a plaintiff in a major constitutional challenge, and, as a result, Canada's prostitution laws were struck down in 2010.

Terri-Jean Bedford is the most famous domintrix in Canada, whose legal case against the Canadian government changed Canadian sex worker law.

She operated an S&M dungeon in Thornhill, Ontario, called Madame de Sade's House of Erotica, but dubbed the Bondage Bungalow by the press. In 1994 she was charged with operating a bawdy house, and was convicted in 1999. Throughout the Superior Court trial, Bedford's appearance was notable, dressing all in leather and always appearing with a black leather riding crop.

You have subscribed to alerts for Terri-Jean Bedford.

You have been added to Terri-Jean Bedford's favorite list.

You can also sign-up to receive email notifications whenever Terri-Jean Bedford releases a new book.