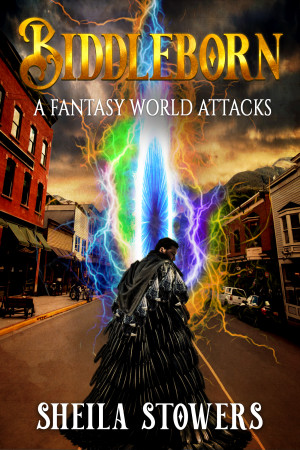 By Sheila Stowers
When seventeen-year-old Meridian Page’s imaginary characters begin showing up in her real-life small town of Biddleborn, the town becomes awash in chaos. Can Biddelborn’s residents save the town from Meridian’s imagination? Read and find out. More
Seventeen-year-old Meridian Page has a rich imagination. To escape her quiet and boring town of Biddleborn, she makes up stories in her head—stories about a magic-filled world called Detritus and its inhabitants, including a princess named Lanora and a man called the Cat Lord. Not realizing how thin the walls of reality can be in a town where children have nothing better to do than tell stories, Meridian is shocked when the Cat Lord shows up in Biddleborn and warns her that imaginary characters like him are slipping through from Detritus to the real world.

SHEILA STOWERS was born and raised in Southern Illinois, where she taught high school English for a long time. She now lives in Northeast Arkansas, where she shares a small cabin with an awful lot of cats and a solitary tortoise. She also has a small herd of goats and a flock of chickens, including a rooster who regards her with suspicion. Some of Sheila’s animals helped inspire the characters in her debut young adult fantasy novel titled Biddleborn: A Fantasy World Attacks. When she isn’t caring for animals or writing, Sheila works at a local university, where she stares at data and writes reports.

Reviews of Biddleborn: A Fantasy World Attacks by Sheila Stowers

You have subscribed to Smashwords Alerts new release notifications for Sheila Stowers.

You have been added to Sheila Stowers's favorite list.

You can also sign-up to receive email notifications whenever Sheila Stowers releases a new book.