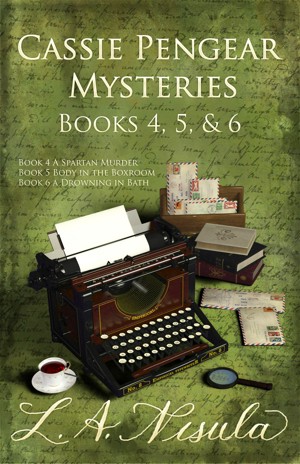 Cassie Pengear Mysteries Books 4, 5, 6 a Spartan Murder, the Body in the Boxroom, a Drowning in Bath

By L. A. Nisula
Books four, five, and six of the Cassie Pengear Mysteries in one volume. In a steampunk London that almost existed, where tinkerers and clockwork devices exist alongside handsome cabs and corsets, murder is still solved by traditional observation and intuition. This is where American typist Cassandra Pengear finds herself stumbling over corpses and helping Scotland Yard detectives solve murders. More
Books 4, 5, and 6 of the Cassie Pengear mystery series in one volume

A Spartan Murder
When Cassie Pengear is summoned to Oxford as a suspect in a murder, she assumes it’s by one of the Scotland Yard Inspectors who don’t appreciate her occasional help. She’s surprised to learn it’s her friend Inspector Burrows, and even more startling, he actually begins to give her information on the case. Startling until she realizes his two best suspects are committing a crime Inspector Burrows would rather overlook simply by being together. Now she’s keeping suspects' secrets while investigating blackmail and murder.

The Body in the Boxroom
When Cassie Pengear agreed to spend the evening with her cousin Milly, Milly’s latest gentleman caller, and his mother, it was with the promise that Milly and her gentleman would not trouble her again unless there was an impending marriage. She did not expect Milly to stumble over a body in her prospective mother-in-law’s boxroom, and she certainly did not expect Inspector Wainwright to draw the case. Now Milly is convinced they’re all suspects and Cassie is the only one who can figure out who murdered the body in the box room.

A Drowning in Bath
Cassie Pengear had just solved a difficult case in London and was looking forward to a quiet holiday in Bath where she could relax, visit the Regency sights, and read Jane Austen novels. Her cousin Milly had very different ideas of a how to spend their holiday and convinced Cassie to try the mixed bathing at the hotel baths. While there, they witness one of the guests being murdered. With the police insisting it was nothing more than a tragic accident, if she wants to see the killer caught, Cassie has no choice but to try to solve A Drowning in Bath.

In a Victorian England that almost existed, a steampunk London where tinkerers and clockwork devices exist alongside hansom cabs and corsets, murder is still solved by traditional observation and intuition. This is the London where American typist Cassandra Pengear finds herself stumbling over corpses and helping Scotland Yard detectives solve murders (although they inexplicably prefer to call it interfering). Follow her adventures in the Cassie Pengear Mystery series, beginning with The Killing at the Carnival.
Available ebook formats: epub mobi
Price: $9.99 USD
Buy Add to Library Give as a Gift
How gifting works
Create Widget
Tags: cozy mystery victorian mystery steampunk mystery mystery box set traditional puzzle mystery mystery set in london
About L. A. Nisula

Reviews of Cassie Pengear Mysteries Books 4, 5, 6 a Spartan Murder, the Body in the Boxroom, a Drowning in Bath by L. A. Nisula

You have subscribed to Smashwords Alerts new release notifications for L. A. Nisula.