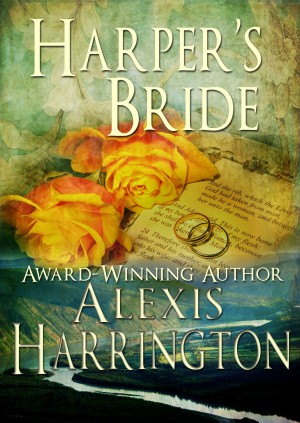 By Alexis Harrington
Rated 4.43/5 based on 7 reviews
Melissa Logan stood by in horror as her husband sold her to pay a debt. She knew that marrying Coy Logan to escape her drunken father and brothers had been a huge mistake. Coy dragged her to Dawson to join the Yukon gold rush. Now penniless and with a baby she “belonged” to Dylan Harper, a man said to have a heart of stone and a knife under his store counter that he wielded without hesitation.

I've been a self-employed working novelist for the past twenty years. Thanks to e-publishing, my titles are for sale all over the world, and so far, in English, Spanish and German.

I live in the Pacific Northwest near the Columbia River, still within 10 miles of my old high school. I have one Great Pyrenees dog and an old girl I rescued from the shelter who's kind of blind and a little hard of hearing, and one cat. My chickens all went to that great coop in the sky so replacements will be in the offing after we reinforce their worldly coop here in February. My hours are kind of goofy--I'm just not a morning person and tend to be up late when the rest of the world is sleeping--and QUIET. No phones, faxes, distractions. Just the kids and me, candles burning, and the elevator music coming out of my iPod.

Before I made the leap to full-time writer, I spent about 12 years working for consulting civil engineers. Riprap, anyone? How about a nice detention pond?

I've read several books by this author and enjoyed them all.☺

Really well written and engaging. Should have been a five star if the ending had not been so abrupt. I would also have appreciated an epilogue.

(reviewed the day of purchase)
adventurat reviewed on Feb. 5, 2011

I really, really enjoyed this book. It doesn't get five stars because it's not perfect, but it's really, really good. It's set in the Yukon of the Klondike Gold Rush, which is an unusual choice in a historical, in my experience (the glittering Regency being much more in the common way). And the setting is so real, so palpable, it's as much a character in the story as any of the people. I had the set and costumes from McCabe and Mrs. Miller in mind as I read, and I learned a lot about the that time and place, with its lack of horses and streets so muddy that whatever dray animals could be employed pulled sleds rather than wheeled conveyances, its lack of dairy cows and the price a man could get for any of the luxury goods he was stalwart and persistent enough to transport from down south to sell to the miners and anyone else up there.

I enjoyed reading about Melissa, and I rooted for her, "though at times she was Snow White whistle-while-you-work perfect." Her work ethic and indefatigability made me feel tired on her behalf, and guilty for being grateful I'd never had to do so much grimy laundry by hand while looking after a baby and cooking and keeping house. (Heck, I'm not so sure I'd be able to swing that even with mod cons. I am so lazy.)

Melissa is thrust into very close quarters and an awkward relationship with Dylan, to settle her ne'er-do-well husband's debt, and although it's an odd premise, Harrington makes it work. In spite of Dylan's assurances that he will never attempt to claim husbandly rights, Melissa is terrified of Dylan to start with, but determined to earn her keep - and a living - so she and her baby will never have to be dependent on a man again. Just as Melissa has been scarred by a history of bad men, Dylan has his own emotional scars. They both cling to these flawed perceptions of the opposite sex a little longer than I thought strictly necessary, given the way the relationship develops, and although they eventually get very talky about things, I began to be frustrated that neither one of them had developed the courage to declare their feelings to the other. Until one of them does, of course. Which then brings the story to an end, shazam, so that's probably why it didn't happen sooner.

There are some wonderful scenes in this, and I don't just mean the sex (oh look, is that a spoiler?). Rafe Dubois is a wonderful secondary character, and he has some terrific, very telling exchanges with Dylan. Melissa's husband, her father and brothers, are all cut from the same filthy, inferior cloth, and they all emanate an undercurrent of pettiness and menace that create a gut-level uneasiness that raises alertness and adrenaline levels in the protagonist and the reader.

I've read a couple of books from this author & I've liked them all. They are heartwarming weastern romances with happy endings (@ a reasonable price). This author has proven herself to me & I will purchase more of her books in the furture.

I don't remember where I heard about this book, but I definitely enjoyed it. The love story unfolds slowly and was satisfying. The ending was a little abrupt, but I find that's a problem with many romance books. The description of the gold rush town and the cast of characters were well done and enjoyable.

A very enjoyable book. Glad I happened across someone reviewing on another website.

(reviewed 21 days after purchase)
lind reviewed on April 9, 2010
(no rating)
A well written story that has you reading with anticipation.
Wonderful storyline and very rich characters. A must read

You have subscribed to alerts for Alexis Harrington.

You have been added to Alexis Harrington's favorite list.

You can also sign-up to receive email notifications whenever Alexis Harrington releases a new book.