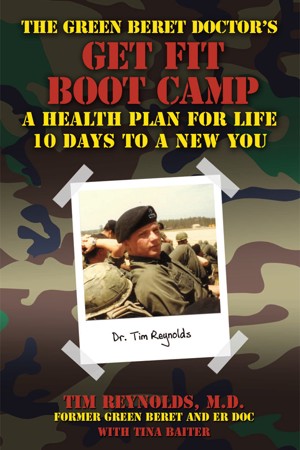 The Green Beret Doctor's Get Fit Book Camp: A Health Plan for Life

By Tim Reynolds
As a Green Beret, you are pushed to your limits physically, mentally, and every other way imaginable. For so many years I have watched our nation get fatter and less fit. We are a country of couch potatoes, and it’s time to do something about it. This boot camp is not some fluffy philosophy on health. It will take you through the real tried and tested things that I actually do in my own life.

Dr. Tim Reynolds is the President and CEO of Dr. Tim, International, a company he founded in 2009 to allow him to share his passion for Living Every Minute with others. He dedicates countless hours each week to helping other people change their lives through mentoring, life building, giving inspirational talks and writing for his motivational newsletter, Adventures with Dr. Tim.

Dr. Tim was the first member of his family to graduate high school. He joined the military shortly after graduation. Dr Tim was a graduate of the Special Forces Q-course in July of 1982. He served as a Green Beret medic on an A-Team, as the Battalion medic and eventually as a Special Forces Battalion Surgeon for the 19th Special Forces Group (Airborne). He served both enlisted and as an officer from 1980 until 2000.

Prior to starting HealthCARE Express in 2006, Dr. Tim held numerous positions across the medical field, including: medical director of the Wadley Regional Medical Center Emergency Department and level II trauma center; director, Texas College of Emergency Physicians Board of Directors; president of E-Med Services, LLP and of E-Med Billing Solutions, LLP; associate clinical professor for the Area Health Education Center at the University of Arkansas; founding member of the Greater People’s Clinic of Texarkana Board of Directors.

In addition to his medical experience, Dr. Tim is also an entrepreneur and successful businessman. He is currently the chief executive officer of TL Reynolds Properties, LLP, a real estate investment company; and he is a managing partner of JJET Developments Ltd., a real estate development company.

Dr. Tim has served on numerous other committees and boards throughout both the medical and business communities and is published in various journals and publications. He is sought after as a presenter at many national conferences.

In his leisure time, Dr. Tim enjoys spending time on his Ranch in Atlanta, Texas, where he lives with his beautiful wife, Pam, and their five amazing children. He holds a black belt in Tae Kwon Do, is a SCUBA rescue diver, and a pilot. He also enjoys body building, golf, and hiking.

Dr. Tim is a world traveler, having visited six of the seven continents. He is a firm believer in living every minute of life and teaching others to do the same. He is a published author, haven written for Total Health Breakthroughs and Early to Rise. He has also appeared on syndicated radio shows like Livin’ La Vida Low Carb. His online website www.greenberetdoctor.com allows him to reach thousands of people around the world as they subscribe to his weekly self-help and life improvement adventure newsletters.

Health Plan for Life
Dr. Tim gives information on why you need his new book!

You have subscribed to alerts for Tim Reynolds.

You have been added to Tim Reynolds's favorite list.

You can also sign-up to receive email notifications whenever Tim Reynolds releases a new book.