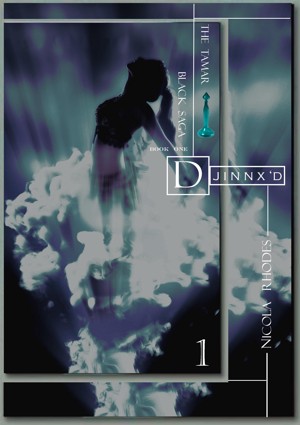 "Your wish is my command!"

What would you wish for if you were offered three wishes?
When poor little rich girl, Tamar, found a dirty old bottle in the river and released an ancient and powerful Djinn, she decided to go for the big one, the wish to end all wishes.

Well, it seemed like a good idea at the time.. More
"Your wish is my command!"

What would you wish for if you were offered three wishes?
When poor little rich girl, Tamar, found a dirty old bottle in the river and released an ancient and powerful Djinn, she decided to go for the big one, the wish to end all wishes.

Well, it seemed like a good idea at the time...

... or Jinxed by a genie, which is what happens to Tamar when she is tricked into taking the genie's place in the bottle.

Good - in that she now has phenomenal cosmic power

Bad - in that she is now the slave of the bottle for the next several eternities.

But eternity is cut short when she meets Denny.

At first he seems just the latest in a long line of human masters, but it soon becomes apparent that he is no ordinary master when he declares his intention to set Tamar free from her bondage - no matter what the cost.

He has no idea what he's let himself in for.

Witches, mermaids, houri's a homicidal Djinn and a mad forest god with a superiority complex and that's not the half of it...

What can kill a Djinn?

If Denny can't answer this question in time then it will all have been for nothing.

“The first Tamar Black book is a lively and delightful read.” (Witchreader on Amazon US)

“Comic fantasy at its best. Comparable with the masters of the genre.” (Wendy Darling on Amazon US)

“ … A delightfully funny story, yet laced with suspense.” (Bleep50 On Amazon US)

“Four stars for an entertaining read and one extra for originality.” (YBR on Amazon UK)

About the Author
Nicola Rhodes often can’t remember where she lives so she lives inside her own head most of the time, where even if you do get lost, it’s still okay.
She has met many interesting people inside her own head and eventually decided to introduce them to the rest of the world, in the hopes that they would stop bothering her and let her sleep.
She has been doing this for ten years now but they still won’t leave her alone.

She wrote this book for fun and does not care if you take away a moral lesson from it or not.

You have her full permission to read whatever you wish into this work of fiction. As she says herself:
“Just because I wrote this book, doesn’t mean I know anything about it.”

The narration proceeds along at a casual sort of dinner table pace. You can almost hear it voiced by someone like Stephen Fry or whoever it was that did the voiceover for the Hitchhiker's Guide movie. While the narrator is consistently describing things in a calm, matter of fact manner, such that you can almost see the amused smirk as he describes the way the story proceeds, you still have a good sense of just how frantic the characters are in certain scenes. A lot of times when an author tries for the dry, smirky narration, then the characters themselves seem to acquire the same sort of calm approach to things. However, this story very thoroughly portrays Denny and Tamar's alternating frustrations with each other and the situation as they move from problem to problem.

There are a number of cliches and tropes, but they're handled very well, with a liberal amount of lampshade hanging. Playing with the tropes is a central part of the books humor actually, and it could be said that Denny has weaponized his genre savvy even well past the point of being dangerously genre savvy. And that dovetails in with other elements of the book's story and setting.

The story is rather reminiscent of Douglas Adams with the frequent asides and quirky humor, actually. While they don't quite leave the Earth, except when maybe they do, it still remains a fun sort of romp through a fantastically farcical world. Right down to the delightfully irreverent retelling of the Biblical creation that occurs within the first few pages.

All in all, a very wonderful piece of writing.

(review of free book)
Simon Perkins reviewed on April 15, 2012
(no rating)
This is the first in an octet of novels dealing with the adventures of a djinn called Tamar the Black, all of which I have read & thoroughly enjoyed. Unlike the usual, over-written, unnecessarily purple-prose-ridden fare of your average, run-of-the-mill pulp fantasy, these books have a wonderfully light, witty, almost conversational tone to their prose. This carries the reader through adventures & setbacks to a satisfying conclusion. The plots are convoluted & clever, yet engaging. The author has a deep knowledge of various pantheons & mythoi, which she weaves unobtrusively, yet entertainingly, into her stories. She effortlessly meshes fantasy & magic with the prosaic modern world. Her characters are both believable & likeable. I would recomend everything in this series, (the other 7 Tamar books & the rest of her work, including the SCI'ON sci-fi/fantasy crossover series is available in a number of formats from Smashwords & Goodreads). I can't understand why Nicola Rhodes work isn't massive! It is a hackneyed cliche you hear all the time about authors, but, in my opinion, (& I only have an English degree), I truly feel the quality of her writing is on a par with Pratchett & Tom Holt. Her fiction has had me both laughing my arse off & brought a tear to my eye. Like a refreshing, breath of fresh air, I can recommend this novel without reservation. Even to those, like me whose palate for fantasy has become jaded through over-exposure.

I enjoyed this story, and found it a refreshing change from the everyday Vampire fare we've been served by writers at large. That said, if you're looking for something different to read, this is a good choice.

Had all, i want from a book. Adventure, humor, magic and more; and all that in the right mix. Wonderful!

I absolutely loved this book, from the prologue to the epilogue, I really enjoyed it. Sly & rich fare, the breezy prose belies its true intensity. As other reviews have noted, the editing is not without flaw, but really, it was no big deal.
I am craving more from the Nicola Rhodes.

A fun and inventive story, well-written, but poorly edited.

Punctuation errors are rife, with often more than one in a paragraph. As Donna Jaske has noted, the dialogue is frequently paragraphed incorrectly. And the text size sometimes varies from paragraph to paragraph for no reason.

Properly edited, this book would be a grand-slam home run. The fact that I read it all the way to the end despite the editing problems is testimony to how much I enjoyed the story and the story-telling; sloppy editing is something I don't tolerate well.

What a fun, fun book this was to read. I would say the conversations were the very best part. I have no sense of humor, and I actually smiled while I read this.

Some time ago I discovered a little known author of fantasy books Nicola Rhodes. I bought her first book “Tamar Black – Djinnx’d” and thoroughly enjoyed it – so when it was released, I bought the next one “Reality Bites” and then the one after that “Tempus Fugitive” since the second book was well up to the standard of the first. I was not disappointed – these books are witty, light-hearted fun and very cleverly written and get better with every book – the plots more intricate, the characters more developed and interesting as their stories are carried on from book to book.

Since I had read with great enjoyment the first three Tamar Black books and found the author talented, witty and original, I looked forward to reading the fourth book in the series (The Day Before Tomorrow) as you might expect.
When I reached the last page I was seized with a great disappointment - disappointment that the book had finished that is. I wanted it to go on. I really was quite gutted for a minute there. And it struck me then. “Why is this woman not famous?”

If talent like this can be overlooked and eclipsed by the likes of Twilight (to give one example of some absolutely egregious rubbish that is out there polluting young minds) then there is something wrong with the world.
I daresay there are more examples of this imbalance out there – this just happens to be the one I know about.

“The Day Before Tomorrow” was brilliant – nothing less. I had considered Ms Rhodes to be a talented writer, but I am now not so sure she isn’t a genius.

When you read her work you are transported into her world - you can see the story unfold before your eyes as if on a movie screen. She never tries to show off her intelligence or how much she knows about her subject with long and tedious explanations – she just tells the story in the most captivating manner.

What a total wanker (the reviewer below mine, not the book). This is a rotter of a book and deserves at least three stars. Very imaginative in concept even if a little light on execution of plot and dialogue.

I've read through the other reviews here and honestly I don't see what they are raving about. This author has a decent imagination, but the entire story seems to me to be too rushed and lacking in the humour others see in abundance. I liked this story, but I can't give it a glowing review. It was okay, but nothing to write home to mum about.

You have subscribed to alerts for Nicola Rhodes.

You have been added to Nicola Rhodes's favorite list.

You can also sign-up to receive email notifications whenever Nicola Rhodes releases a new book.