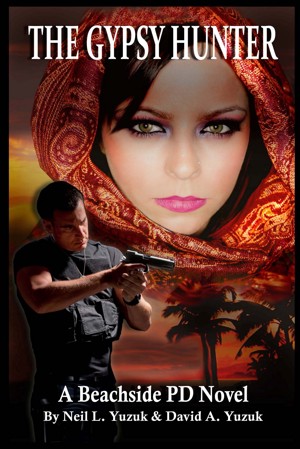 Rated 5.00/5 based on 1 review
For almost two decades Detective Lieutenant Robert M. Zaragossa has threaded his way through the secret world of the Gypsies, solving crimes from simple fortune-telling scams to the uncovering of counterfeiters, to the hunt for the murderer of a heroic war veteran. The crimes are real; so be prepared for the hot action of the hunt, as the bad guys are brought to justice. More
Once again, this unique father and son writing team brings us back to the world of Beachside PD. With the ease of master story-tellers, they weave an intricate web of mystery and suspense. This time the drumbeats are faster and the plots, even more devious.

Meet Detective Lieutenant Robert M. Zaragossa—the Jawndari Romano (Gypsy Cop). For almost two decades he has threaded his way through the secret world of the Gypsies, solving crimes from simple fortune-telling scams to the uncovering of counterfeiters, to the hunt for the murderer of a heroic war veteran.

Danny Phillips, Beachside PD’s Reluctant Knight is back on the job along with his partner, Anna Perez. Follow them as they enter the world of the Seminole Nation hunting for a missing young woman; and their coming together as a family.

About the Series: Beachside PD

Beachside PD is a series filled with tension, distinctive wit, and unforgettable characters,

If you are a police procedural series fan who prefers a dose of realism along with hard-hitting action, and savvy dialogue, it’s guaranteed you’ll be wanting more from this father and son writing team.

In reading “Beachside PD: The Reluctant Knight” – book one of the Beachside PD series, I was pleasantly surprised by its unique approach to crime and corruption. The characters were not stereotypes and the plots were fresh and exciting. By the end of the book, I felt as though Danny Philips and Anna Perez were my close friends and I couldn’t wait to hear more about them.

“Beachside PD: The Gypsy Hunter” does not disappoint. Danny and Anna continue to develop in their work and relationship, now also seen through the eyes of their teenage daughter and an old friend who works in the media. The authors skillfully weave the fabric of reality into the couple’s heart-warming romance, creating unforgettable scenes. On the job and back from FBI training, they spearhead the investigation to find a missing Seminole Indian Nation coed, adding more unforgettable characters to the Beachside series.

The detective stories now are focused on their colleague, Robert Zaragossa – a character I have come to like. He has no striking physical features, unlike Danny. What he has are extraordinary skills and an iron will; both of which are thoroughly tested by the high profile and complicated cases—from simple scams to murder—that are all the more exciting against the backdrop of the colorful Gypsy culture. The cases are real as they’re based on a real police officer known to his fellow officers as the Gypsy Hunter. The authors present this exotic aspect of the story exceptionally well. For me, the novel has served as a textbook about this fascinating group of people: their language, their beliefs, their heritage, and their customs.

Without a doubt, “Beachside PD: The Gypsy Hunter” is yet another masterpiece by authors Neil Yuzuk and David Yuzuk. It has a one-of-a-kind crimes and detective stories that weave romanticism with realism and action adventure with everyday life’s drama. I love the behind-the-scene police operation details as I did in the first book, “The Reluctant Knight.” And I love the fun side scenes about the media, the politics, the people, and even the Clintons, who make an appearance at the Super Bowl in this book. Overall it is a riveting and unforgettable read!

I know that “Beachside PD: Undercover,” the sequel to “The Gypsy Hunter” and “Cities of Sand and Stone,” a prequel, are both in the works. I look forward to reading them.

You have subscribed to alerts for Neil L. Yuzuk.

You have been added to Neil L. Yuzuk's favorite list.

You can also sign-up to receive email notifications whenever Neil L. Yuzuk releases a new book.