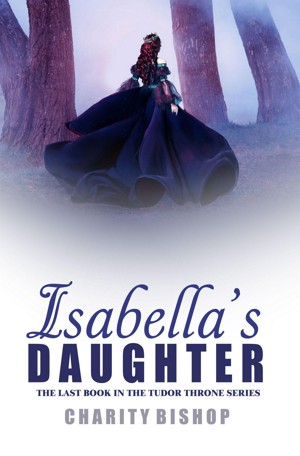 It looks like God has answered her pleas when her sister washes up on the coast, on her way to claim the throne of Castile after their mother’s death. Katharine believes her salvation has come, for her sister can rescue her from her enforced poverty at Henry’s court. Little does she know that her brother-in-law, Philip, has other ideas…

Their arrival coincides with a horrific discovery that implies the king’s fearsome enemy, the Duke of Suffolk, intends to make his move at last. He has long coveted the Tudor throne, and sends a new threat to England that will change history forever. It’s up to the royal enforcer, Sir Thomas Lovell, to unravel a new plot and make England safe, but it may cost him everything he holds dear. Can he outsmart Suffolk one last time?

Charity Bishop is funny, quirky, analytical, a little sentimental, and occasionally forgetful, with an offbeat sense of humor, a tendency to like sci-fi, and a storehouse of knowledge about “useless trivia.” She gets fixated on learning things, and obsesses over them until she knows everything there is to know about them, then looks for something new to learn. She gets bored with “same-ness,” but is good at impartiality and seeing both sides in an argument. In fact, she’s likely to argue both sides for the sheer fun of it.

She grew up in the church and was saved at a young age, but re-evaluated and re-dedicated her life to Christ three years ago. Since then, God has encouraged her to trust Him with her life and future – which sometimes is an uphill battle for a stubborn girl. As she struggles with understanding His ways along with her characters, He gently reveals the answers. He’s her co-author, both in the stories she tells and in her very own story.

Her day job is a magazine editor, and her hobbies (other than writing books) include over-analyzing everything she comes into contact with, vigorously defending various incarnations of Sherlock Holmes against perceived injustices, irritating her friends with theological musings, and MBTI typing fictional characters.

About the Series: The Tudor Throne

Henry VII faces traitors on all sides as he contends with the price of power.

Also in Series: The Tudor Throne

You have subscribed to Smashwords Alerts new release notifications for Charity Bishop.

You have been added to Charity Bishop's favorite list.

You can also sign-up to receive email notifications whenever Charity Bishop releases a new book.