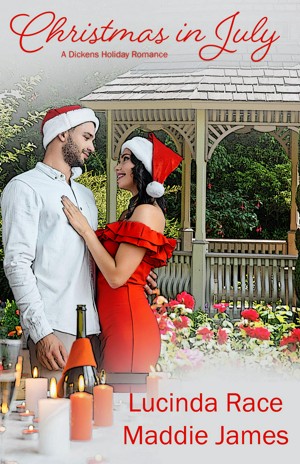 But her rival, Chase Ellis, is also in town, and he’s out to grab the Dickens location for a movie, too, working the locals and smooth-talking the town council. This is a familiar snowy path and Sylva ponders whether to confront or avoid him. They’re both staying at Holly Hill Inn, so avoiding him—and his molten chocolate brown eyes—is impossible.

Then Chase proposes a sweet as Christmas candy deal. When that falls through, Sylvia counters with a deal of her own.

Both know their reputations and careers are on the line. Sylvia assures her boss the contract is in her Christmas stocking. Chase knows if he loses, he risks future jobs for his newly formed company. And if that isn’t enough, the competition takes on an unexpected twist when the two sneak kisses that could scorch even the hottest of days during the Christmas in July festival.
Download: epub mobi (Kindle) pdf more Online Reader
lrf pdb txt
Price: Free! USD
Add to Library
Create Widget
Tags: holiday christmas small town sweet romance dickens summer romance workplace romance rural romance christmas in july new englance
About Lucinda Race

Lucinda lives, with her husband, in the Berkshire Mountains of western Massachusetts. Her writing is contemporary, fresh and engaging. In her debut series, Cari McKenna and her family deal with life-changing events that fill their future with hope and love. She has released two novellas and five novels in the Loudon Series

About the Series: Dickens Holiday Romance by Maddie James

Maddie James books set in the quaint Christmas village of Dickens in New England, featuring the historic Holly Hill Inn, Kringle's Diner, and the characters who live and work there.

Chase and Sylvia are competing for the same Christmas movie set location, her home town of Dickens. She thought it was a slam dunk, but he puts up a good fight. I thought it was too quick between enemies to kissing and considering sabotage for love. I would have like a little more to the short to novella length story before the epilogue.

Oh gosh. If this book hadn't been less than 20K words, I would have not finished it. So in the beginning, Sylvia was acting stupid because Chase literally told her why he was there and she kept asking why he was there when he said to scout a location and she knew that already. Then, she wanted to use the fact that she was born there just to win instead of it being fair. Well newsflash to her, she lives in LA so it's not like she lived there. And at the cookie competition, she expected her friend to make her win just because they were friends. Like... has she ever heard of fair and square? Her entire attitude throughout the entire book was really poor, and as Chase pointed out- childish. Then, she lied to her boss and didn't just tell her that someone else was trying to get the permits. No wonder she got fired. She was such a sore loser as well. And she was like "Chase got my contract" like it was guaranteed for her just because she was born there. And then you have Chase, who was seriously considering withdrawing for her sake. He even offered to withdraw and she said "no" then went on later to rant to her friend that Chase didn't care what happened to her. Um..hello- he just offered to withdraw for you. She was annoying throughout the entire book and I am so glad that Chase got the deal because she didn't deserve it. She deserved everything she got, and more. Also, the jump between chapter 9 and the epilogue was a bit jarring since they went from her still being upset to them being engaged.

You have subscribed to Smashwords Alerts new release notifications for Lucinda Race.

You have been added to Lucinda Race's favorite list.

You can also sign-up to receive email notifications whenever Lucinda Race releases a new book.