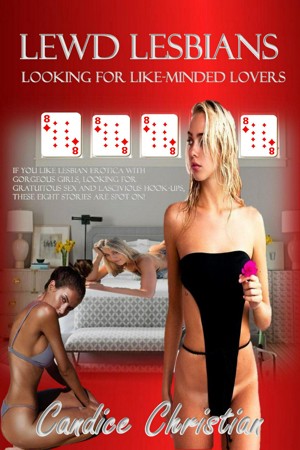 If you like lesbian erotica with gorgeous girls, looking for gratuitous sex and lascivious hook-ups, these eight stories are SPOT ON! More
1 Tight Spot or She Meets Stephanie
Meghan, an unhappily married woman, plans spending New Year’s Eve, alone, without her husband. Until she meets Stephanie!
2 The Right Spot or A Sense of Liberation
Thirty something Brittany is recently divorced. An event that, instead of bringing sorrow, brought Brittany a sense of liberation.
3- Deep Spot or In Way Too Deep
Cindy and Jackie are best friends. Cindy is straight as an arrow; Jackie is a devout lesbian. This relationship, often brings about a clash of opinions, that at time teeters on the edge of seduction or even destruction of their friendship.
4 Pleasure Spot or What is Pleasure
Alena Browne is a successful lawyer in a large firm. Her administrative assistant begins maternity leave, and HR assigns a nineteen year old bombshell that proves to be real trouble
5- Dream Spot or Chasing a Dream
Sandie Moved to Las Vegas for Fame and Fortune at an Early Age. What She Found Was Something More Priceless to Her.
6- Dark Spot or Dark Passage
Leisha has plans to spend a romantic weekend with her lover. The love between the two women is strong and each feels they are the complement the other
7- Shadow Spot or Standing in the Shadows of Lust
Hannah has just been hired by Carise, a super star rock star. Hannah feels life is as good as it can be. Until Ellie shows up.
8- Tricky Spot or Slick Trick
Sarah Jane decides to take an erotic trip on the wild side and responds to an ad on Craigslist.
Available ebook formats: epub mobi pdf lrf pdb txt html
First 15% Sample: epub mobi (Kindle) lrf more Online Reader
pdb
Price: $4.99 USD
Buy Add to Library Give as a Gift
How gifting works
Create Widget
Tags: erotica lesbian group sex sex toys cunnilingus analingus lesbian anal maturbation
About Candice Christian

You have subscribed to Smashwords Alerts new release notifications for Candice Christian.