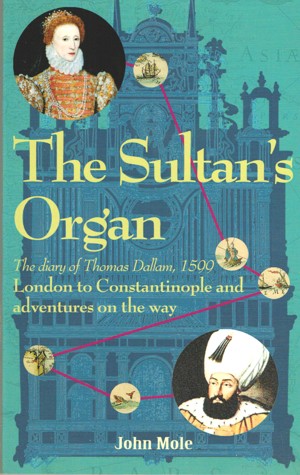 In 1598 merchants of the City of London paid for a Present to be given by Queen Elizabeth to Sultan Mehmet III of Turkey. In return the merchants hoped to secure trading concessions, and the Virgin Queen to turn the Sultan's military might on her Spanish enemies. The Present was a carved, painted and gilded cabinet about sixteen feet high, six feet wide and five feet deep. It contained a chiming clock with jewel-encrusted moving figures combined with an automatic organ, which could play tunes on its own for six hours - or by hand to the point of exhaustion.

The Present was dismantled and dispatched on a merchant ship early in 1599. It took six months to get from London to Constantinople. With it went four craftsmen. They were Thomas Dallam the organ builder, John Harvey the engineer, Michael Watson the carpenter and Rowland Buckett the painter. Dallam was just twenty four years old.

After University and Business School John Mole spent fifteen years criss-crossing Europe, the Middle East and Africa for an American Bank. He was was based in the USA, London and Greece.
His fortieth birthday present to himself was to quit employment. The main incentive was to write full time. Published works include three comic novels - “Sail or Return” “The Monogamist” and “Thanks, Eddie!”“Management Mole” is about going back as a temp in the back offices of the kind of organisation he used to manage. The best-selling "Mind Your Manners" is about how to manage people of different cultures. For a few years he had a consultancy business focussing on how to get people from different nationalities and cultures to work together.
Meanwhile John tried his hand at various entrepreneurial ventures. An attempt to establish a chain of baked potato restaurants in Moscow came to an end when the Russian Mafia took an interest. He had more success with INBIO Ltd, which imported Russian biotechnology for environmental protection and with a project to control the spread of water weed on Tanzania's Lake Victoria. “I was a Potato Oligarch" is the sorry but comical tale of the Russian venture.
In Greece with his family he restored an old stone house on the island of Evia, which they go back to every year. This resulted in “It’s All Greek To Me!”, which has just been republished and updated. A British / Australian movie production company optioned it and commissioned him to write the script. It is under development and shooting is scheduled to start in 2018.
When not at the laptop he sings and plays the baglama, a miniature bouzouki, with a Greek band in London. He loves to travel, especially around the Mediterranean and the Middle East, although backpacking has been superseded by trundle-casing. Journeys have inspired more books. “The Sultan's Organ” is the diary of a musician who took an automated organ and clock to Constantinople as a gift of Queen Elizabeth to the Sultan in 1599. It’s such a great read that he put it into modern English. “The Hero of Negropont” is a comedic novel about an English Lord, who gets shipwrecked on Evia in 1792, when Greece was still under Turkish rule. For “Martoni’s Pilgrimage” he translated the diary of an Italian lawyer who travelled to the Holy Land in 1394 and had a hard time getting back home - it’s a great traveller’s tale.

You have subscribed to alerts for John Mole.

You have been added to John Mole's favorite list.

You can also sign-up to receive email notifications whenever John Mole releases a new book.