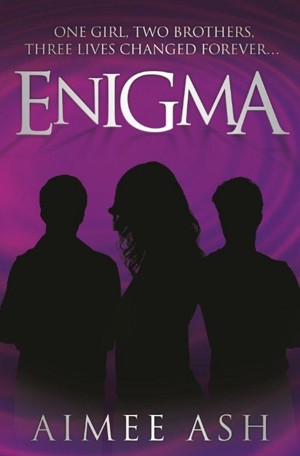 Kate is deeply intrigued by Jack, and begins to feel differently when she’s in his company. She is flattered by the attention he showers her with and enjoys her newfound confidence. And even though their relationship symbolises young love, Kate soon realizes that Jack is anything but normal.

When Jack is forced to reveal his many secrets, including the curse inflicted upon him by his twin brother, Sebastian, Kate begins questioning what is real and what is just a mere illusion.

Author who writes about the romance and seduction of the supernatural world.

If you love tales of Vampires, Werewolves, Witches & Ghosts check out Aimee's Supernatural novella saga via her website.

Reviews of Enigma by Aimee Ash

Got into characters very quickly and thoroughly enjoyed my time with them. Extremely well written. Highly recommend.

This book was a fun and enjoyable read. Ready for the next book!

Loved it! Can't wait till' the next book to come out!

Kate is an average teen who most girls could relate to and her family are very interesting, especially her brother Brett. I was gripped by the characters immediately and loved the fast paced story telling. There was a lot going on, but this is why I couldn't put the book down and read it in a day! I loved Jack, but my heart belongs to Seb, although I can't predict who has really claimed Kate's heart fully. I can't wait to read part 2 and find out what happens to all the characters, especially Jack. I have now downloaded other books by Aimee Ash to read whilst I wait for the second book.

I really got into this story. What happens next? Will the boys find their mother? Please tell me this isn't the end.

i really enjoyed this book. i cannot find the 2nd one, not sure if it is even out yet. look forward to reading more about Kate, Jack, and Seb.

Enigma keeps you on your feet, once you start reading it, it's hard to put it down. While reading this, you almost wish the curse wasnt true that Jack and Kate could break it and still love each other. Your heart goes out to both brothers, especially with all the secrets and betrayal the endure. The relationships with Kate are swoon worthy, you want to put yourself in her place and have these two hot brothers competing for her attention.

When Kate starts college, she never imagined she would meet the guy that would sweep her off her feet and that she would love and do anything for. Jack Jones was well known around campus, he had a bad boy rep and couldn't be tamed, that was until Kate showed up and stole his heart. They were immediately drawn to each other and they fell hard for one another.

However, Kate didn't know that it was because of a curse that was bestowed on Jack by his twin brother Sebastien. You see, Jack and Sebastien are not normal, they are Enigmas with supernatural powers.

So, when Sebastien comes home all hell breaks loose, because not only did he curse his brother Jack, but he cursed himself. You see Sebastien put a curse on his brother that he would one day fall for a girl who would never truly fall for him and when she broke his heart, it would kill him. Literally!!! Now the other issue is that not only will Jack die but so will Sebastien.

Soon Kate realizes that the curse is real and that the feelings she has for Jack is only because of the curse, they're not real and she starts to fall for the one person Jack hates most, the one who cursed him, his twin brother. And now it's up to her to break this curse before Jack finds out.

I received this eBook from the lovely author herself and thank her for allowing me to read her book in return for an honest review.
I enjoyed this book and really like the idea of the plot. The plot was new and different but the characters fell a little flat for me. Kate got on my nerves most of the time. She didn't have much of a backbone and let Jack push her around a lot. I liked Jack in the beginning but then he seemed to always be apologizing for something and he was kind of just a dirt bag. He didn't treat Kate the way she should have been treated and I'm sure she stayed with him in the beginning because of the curse. And then Sebastian comes back to town.. I really liked Sebastion and loved his dark hair, motorcycle riding, quiet and shy attitude. He's my kind of guy! Loved him and wanted more of Seb! He could sing to me all he wants! Yumm! ;)
The book had me wanting to read more and want to know what happened with them. It kept me interested. At times I felt the book dragged a bit and a little too much description that I found myself scanning to get through it. Things felt repeated at times as well but I did still like this book. I give this book 3/5 stars. I like this book so go buy a copy! You don't want to miss out!

You have subscribed to alerts for Aimee Ash.

You have been added to Aimee Ash's favorite list.

You can also sign-up to receive email notifications whenever Aimee Ash releases a new book.