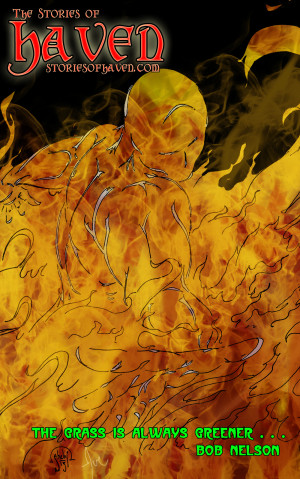 The Stories of Haven: The Grass Is Always Greener...

A story in the Haven Fiction Series, where authors tell the tale of the mythical city of Haven. While the stories are not serial, you can pick up any in the series, this is officially Story #7

Haven is a city in peril. Crime has increasingly become a fact of life as different factions vie for control of the city's vast power and wealth. The authorities are pressed at every turn, often too weak to respond to emergencies, almost equally as often influenced by forces with ill intent.

The city is home to millions and attracts more, some seeking opportunity, some seeking escape, still others seeking something else.
In desperation, some of its citizens have taken to wearing costumes and creating alternate identities to fight crime. In turn, the criminals have donned masks to hide their own identities, create alternate personae, or both.

Haven, started in 1994 as part of a literary nonprofit called Anthology, through their magazine of the same name, is a unique and exciting storytelling opportunity for writers and readers alike. In 2009, Anthology asked Brick Cave Media to develop and promote the Haven series as a separate entity.

In 1994, Bob (Me) co-founded Anthology magazine with writer J.A. Giunta. The magazine would run for ten years and print a wide variety of up and coming poets and writers. Also in 1994, Bob (also me) started the Essenzaslam Poetry Slam, which runs to this day as the longest running poetry slam in the Southwest. In 1999, Bob founded Spokenworld.com, a pioneer internet readio station focusing on spoken word programming. In 2001, writer Sharon Skinner and Bob founded Anthology as a 501c3 nonprofit organization.

Currently, Bob is the chief of Brick Cave Media, a media microglomerate (his home office) for the crazy ideas that his friends and I dream up. In 2006, He released my second spoken word CD, Boboratory, that is available through the Brick Cave Media Store as either a physical CD or downloadable MP3's. He serves on the Board of Anthology, Inc., and still wanders around the local poetry scene.

Also in Series: The Stories of Haven

You have subscribed to alerts for Bob Nelson.

You have been added to Bob Nelson's favorite list.

You can also sign-up to receive email notifications whenever Bob Nelson releases a new book.