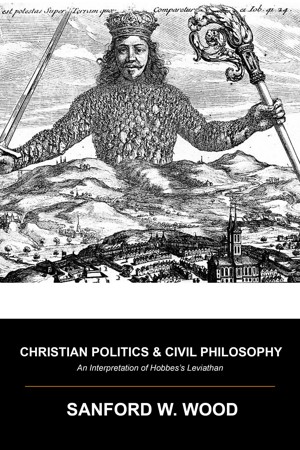 By Sanford Wood
This study demonstrates the overall coherence of the moral and political teaching of Leviathan. While Hobbes is frequently depicted as being inconsistent or insincere, this book demonstrates how Hobbes created a world of value from a world of fact. More
Hobbes takes the low view of human nature. He depicts most men as mean, petty, and fearful. He also rejects the traditional view that morality is the pursuit of certain gods that are objective. By contrast, Hobbes says that all goods are relative, and thus that all obligations must be self-imposed. He also claims that no man can have a duty to do anything for which he does not have a sufficient motive. On this basis he constructs a political doctrine of absolute sovereignty as the most reliable method of satisfying the human need for security and comfort. The distinction between Christian politics and civil philosophy is based on Hobbes's recognition of two independent and complementary sources of truth, divine revelation and natural reason.
Available ebook formats: epub mobi pdf lrf pdb txt html
First 10% Sample: epub mobi (Kindle) lrf more Online Reader
pdb
Price: $5.99 USD
Buy Add to Library Give as a Gift
How gifting works
Create Widget
Tags: philosophy ethics moral values social ethics moral guidance moral ethics
About Sanford Wood

Sanford W. Wood received his Ph.D. in philosophy from Vanderbilt at the age of 29. Some years later he returned to graduate school for post-doctoral studies in computer science and artificial intelligence. During his 40-year teaching career, his preferred subject of instruction was logic.

Near the end of his career, Dr. Wood began organizing his cumulative knowledge to create a logic textbook that would be both challenging and engaging for students, going beyond the often dry applications most commonly found in other texts. But his wife’s failing health forced him to put his work on hold for several years. After her death, Dr. Wood was able to return to his endeavor, completing it in 2019.

He now lives alone with his two cats and pursues his hobbies – gardening and cooking. He maintains a large vegetable garden with a small orchard, and uses the produce he grows to make jams, pickles, and sweetbreads to give to friends and family and sell at the local farmers’ market. He is still active in church and civic affairs, where he often accepted positions of responsibility in years past. However, as he approaches 80, Dr. Wood has decided to take a more passive role and pass the baton on to the younger generation, preferring now to spend his time in quiet contemplation with his cats and his garden.

Reviews of Christian Politics and Civil Philosophy by Sanford Wood

You have subscribed to Smashwords Alerts new release notifications for Sanford Wood.

You have been added to Sanford Wood's favorite list.

You can also sign-up to receive email notifications whenever Sanford Wood releases a new book.