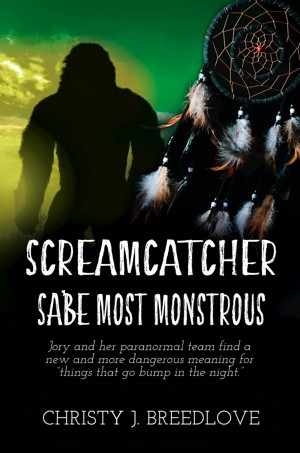 By Christy J. Breedlove
Jory and her paranormal team find a new and more dangerous meaning for “things that go bump in the night.” More
Jory Pike and the Badlands Paranormal Society get a strange and frantic call from a woman who claims her property has been invaded by unknown trespassers who have terrorized her and her husband and killed their two dogs. She says her husband has gone hunting for the culprits and disappeared. The Sherriff’s office performed a routine investigation and mysteriously quit. The woman also called a First Nations Tribe tracker to help her, but after a short investigation, he claimed she had something more dangerous than a bear and wanted nothing to do with it.

Jory’s 91 year-old grandfather believes he knows what this mystery is all about and demands to go on the hunt.

Four teenagers and a seemingly fragile old man find out too late that they are the ones being hunted in the deep Shasta forest.
Available ebook formats: epub
Price: $5.99 USD
Buy Add to Library Give as a Gift
How gifting works
Create Widget
Tags: horror adventure action paranormal young adult monster sasquatch big foot
About Christy J. Breedlove

Chris Stevenson, writing as Christy Breedlove, originally born in California, and moved to Sylvania, Alabama in 2009. His occupations have included newspaper reporter, front-line mechanic and federal police officer. He has been writing off and on for 36 years, having officially published books beginning in 1988. Today he writes science fiction, fantasy, paranormal romance, young adult, adult thrillers and horror. He has a total of 10 titles appearing on Amazon. He was a finalist in the L. Ron. Hubbard Writers of the Future contest, and just recently took the first place grand prize in a YA novel writing contest. He writes the popular blog, Guerrilla Warfare for Writers (special weapons and tactics), hoping to inform and educate writers all over the world about the high points and pitfalls of publishing.

Reviews of Screamcatcher, Sa'be Most Monstrous by Christy J. Breedlove

You have subscribed to alerts for Christy J. Breedlove.

You have been added to Christy J. Breedlove's favorite list.

You can also sign-up to receive email notifications whenever Christy J. Breedlove releases a new book.