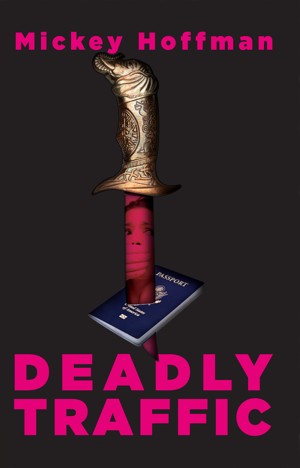 After a student’s lifeless body turns up in a seedy part of Arbor City, an immigrant community leader contacts Kendra. What does she know about her missing students’ activities, their families’ illegal status?

Mickey Hoffman was born in Chicago, and attended public schools where she acquired the strong suspicion that some of her teachers might be human. She wasn't able to prove this fanciful thinking until much later, when she became a high school teacher herself.Before landing in the halls of academia, she worked in a variety of jobs, including computer typesetting and wholesale frozen fish sales. The author is also a printmaker and painter and resides on the West Coast with her long suffering mate, eight marine aquariums and a very large cat. School of Lies is her first novel.

Kendra DeSola is back and ready for action! Sort of. After the previous year's debacle at Standard High (School of Lies) she's taken time off from her teaching job. Complications with eye surgery have isolated her even more. Needing an income, she starts a dog walking business.

Enter Roger Rhus. Slick, handsome, charming and rich, Roger seems like the perfect client. Impressed with Kendra, he hires her to walk his Labrador, Jackson.

Kendra has gone so far as to move and change her number to get away from her stalking ex-boyfriend, Brian. Her new house isn't in the best neighborhood, but she likes it well enough until someone puts a rock through her backdoor. Rushing out to investigate, she literally runs into her new neighbor, Win Ni. Also handsome and charming, Kendra finds herself attracted to a much younger man.

These two chance meetings lure Kendra into another mystery. The accidental discovery of a dead body once more puts her at odds with her police detective adversaries, Detectives Howard and Tapia. And as before, Standard High plays a role in the complex action.

Kendra DeSola is curious to a fault. Scrupulous and trustworthy, she always seems to be getting herself into dangerous situations. Her distrust of the police keeps her from going to the authorities with what she's learned.

Maretta Edwards, Kendra's closest friend, joins her for some of her investigative jaunts. Though she says she hates to be involved, she's right there in the thick of things.

Deadly Traffic is an exciting sequel to School of Lies. Hoffman's characters are engaging, their actions skillfully pulling the reader into the suspenseful plot. I highly recommend Deadly Traffic to anyone who loves a great mystery. Five Golden Acorns.

You have subscribed to alerts for Mickey Hoffman.

You have been added to Mickey Hoffman's favorite list.

You can also sign-up to receive email notifications whenever Mickey Hoffman releases a new book.