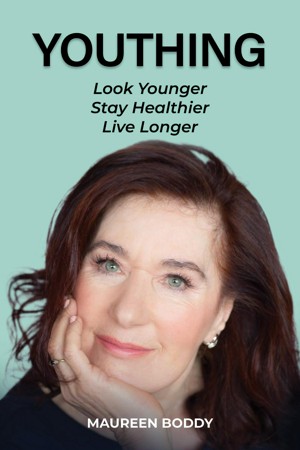 By Maureen Boddy
Youthing: Look Younger, Stay Healthier, Live Longer. This Book will give you proven drug-free solutions to a host of medical problems, too numerous to cover on this page. There are natural safe alternatives. Read the scientific reports proving this and every claim made. PREVENTION IS BETTER THAN CURE. I know that whoever reads it will never be afraid of cancer or heart disease again. More
CONTENTS
About the Author

PART ONE
Youthing explained and how it will affect you

PART 6
You are What You Eat

PART 7
Having a Healthy pH of your Body: The foundation on which to build everything to do with health

About Maureen:
Maureen Boddy was born in England in 1945. She passed a scholarship and attended a prestigious Convent School for Girls, in Darlington, England. She studied Pre Primary teaching (NNEB) and opened a private school where the focus was on teaching children through praise, and encouragement, to achieve more than the regular curriculum, e.g. 3 year old children could read basic words and simple books, using the Glenn Doman method.

In the evenings she studied fashion, design, pattern-making and art, and obtained her teacher’s diploma at the local Technical College, whilst running her preschool in the mornings.

Maureen married her childhood sweetheart, Terry, in 1965. They have 3 children and are proud grandparents of eight grandchildren. The family emigrated from England to South Africa in 1974.

In 1975, she opened a private pre-primary school/creche in Cape Town. This was during the Apartheid era and, as it was a non-racial school, she was often in trouble with local authorities, until she befriended the visiting health officer and social childhood workers and they too became ‘colour blind’.

In 1979 she started a small clothing factory, designing and producing gym wear and custom-made bathing-costumes, called: Boddywear’ She started with two part time staff members which grew into twenty-one full time staff. She ran the school and factory concurrently until 1990, and then continued only with ‘Boddywear’ until 1999, with both the school and factory sold – after 20 years it was time for a new season.

Having so often been invited to do public speaking, she decided to devote more time to her seminar workshops.

She wrote two books on marriage: ‘I Too have a Brain’ for women, and ‘His Cave’ for men written in sonnet form and published in 1996.

Her next two books were on Health and Longevity: ‘Know the Truth’, and ‘Youthing, Reversing the ageing process’. ‘Medical Follies’ followed. New and updated editions on all books will be available shortly.

Youthing: Registered as a cc company 28/10/2010. The title is a neologism meaning “the opposite of ageing”.

Maureen has also broadcast on many radio programs, including the marriage series: Self Worth and Self Esteem; Acceptance, Admiration and Appreciation; Communication – Romance; Forever Young and Know the Truth.

Now at age 75 her focus turned to sharing the knowledge she gained after decades of studying senescence, health and nutrition and being an example of living a Youthing life.

Reviews of Youthing by Maureen Boddy

You have subscribed to Smashwords Alerts new release notifications for Maureen Boddy.

You have been added to Maureen Boddy's favorite list.

You can also sign-up to receive email notifications whenever Maureen Boddy releases a new book.