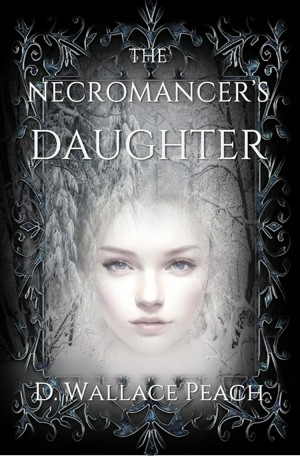 By D. Wallace Peach
Rated 5.00/5 based on 1 review
In a land divided by those who practice magic and those who hunt them, Barus, a necromancer, breathes life into the queen’s stillborn infant. He raises her as his daughter until the day the dying king summons his only heir and falls to an assassin’s blade. To save her father Barus and her own life, Aster must flee. Only one man offers her aid. But can she trust her enemy’s son? More
A healer with the talent to unravel death. A stillborn child brought to life. A father lusting for vengeance. And a son torn between justice, faith, and love. Caught in a chase spanning kingdoms, each must decide the nature of good and evil, the lengths they will go to survive, and what they are willing to lose.
~*~
A healer and dabbler in the dark arts of life and death, Barus is as gnarled as an ancient tree. Forgotten in the chaos of the dying queen’s chamber, he spirits away her stillborn infant and in a hovel at the meadow’s edge, breathes life into the wisp of a child. He names her Aster for the lea’s white flowers. Raised as his daughter, she, too, learns to heal death.

Denied a living heir, the widowed king spies from a distance. But he heeds the claims of the fiery Vicar of the Red Order—in the eyes of the Blessed One, Aster is an abomination, and to embrace the evil of resurrection will doom his rule.

As the king’s life nears its end, he defies the vicar’s warning and summons the necromancer’s daughter. For his boldness, he falls to an assassin’s blade. Armed with righteousness and iron-clad conviction, the Order’s brothers ride into the leas to cleanse the land of evil.

To save her father’s life, Aster leads them beyond Verdane’s wall into the Forest of Silvern Cats, a wilderness of dragons and barbarian tribes. Unprepared for a world rife with danger and unchecked power, a world divided by those who practice magic and those who hunt them, she must choose whether to trust the one man offering her aid, the one man most likely to betray her—her enemy’s son.
~*~
From best-selling fantasy author D. Wallace Peach comes a retelling of the legend of Kwan-yin, the Chinese Goddess of Mercy. Set in a winter world of dragons, intrigue, and magic, The Necromancer's Daughter is a story about duty, defiance, cruelty, and sacrifice— an epic tale of compassion and deep abiding love where good and evil aren’t what they seem.
Available ebook formats: epub
Price: $0.99 USD
Buy Add to Library Give as a Gift
How gifting works
Create Widget
Tags: dragons epic fantasy mythical creatures action and adventure necromancy fantasy quest fairy tale retelling test of faith raising the dead enemies into lovers
About D. Wallace Peach

D. Wallace Peach started writing later in life after the kids were grown and a move left her with hours to fill. Years of working in business surrendered to a full-time indulgence in the imaginative world of books, and when she started writing, she was instantly hooked. Diana lives in a log cabin amongst the tall evergreens and emerald moss of Oregon's rainforest with her husband, two dogs, two owls, a horde of bats, and the occasional family of coyotes

Reviews of The Necromancer's Daughter by D. Wallace Peach

In the Acknowledgements at the beginning of this book, the author says this book was written in response to a challenge "to write a book with one beautiful character, not someone physically stunning, but someone with a beautiful heart, a truly good person."
There are two such people in this book--Aster, the necromancer's daughter, and Barus, the necromancer. Their father-daughter relationship is shown beautifully here, along with much else.
As always, Peach's prose is vivid and poetic. Her descriptions of landscapes, skies, and weather are fulsome and gorgeous. Fear and flight from peril are rendered equally well, such that I felt Aster's terror at being pursued, the rough terrain she flees through, and the snow, cold, and mud that hinder her.
The fictional world is realistic, except it includes dragons. Aster has a special relationship with them, but they are also deployed as aerial threats by one group of humans in the story. Another delightful element is the references to plants used by Barus and Aster in preparing both healing medicines and the poisonous substances used in necromancy. Ambivalence about this practice runs throughout the book. Some see it as a natural extension of healing, but others regard it as evil and justification for hanging any who practice it.
This is a dramatic and compelling read, as scenes of narrow escapes and deadly threats follow one another in quick succession. Reminders of the beauties of the world and the sweetness of Aster's life with her father add poignancy and colour the ending of the story. I recommend this book to almost anyone, but especially readers who appreciate thoughtful and dramatic fantasy.

You have subscribed to alerts for D. Wallace Peach.

You have been added to D. Wallace Peach's favorite list.

You can also sign-up to receive email notifications whenever D. Wallace Peach releases a new book.