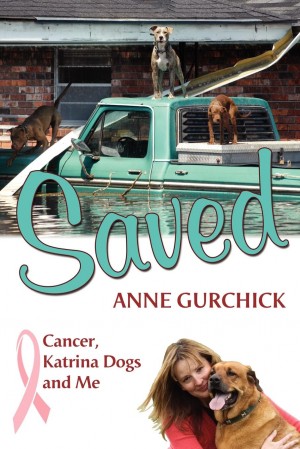 Saved: Cancer, Katrina Dogs and Me

“Saved is an honest account of the power of purpose and commitment… Anne walks through her deepest fears and discovers hope, humor and unconditional love amidst immense devastation. Allow yourself to be inspired…!”
Annie Denver, MA

“In the middle of her own battle with cancer she reaches out to save some of the most forgotten and battered victims of Hurricane Katrina. Anne's story is cause for celebration and the parallels between her journey to wellness and reaching out to the “four leggeds” is further proof that we are inextricably connected to our animals and if we choose to listen, the lessons they give us can change our lives."
John St.Augustine
Radio host and author
Every Moment Matters

Connect with Anne and her friends on a heartbreaking and heartwarming journey that you won’t soon forget.

"Saved is a celebration of friendship… Anne's irrepressible spirit proves that saving oneself is often easiest done by saving another… This is a call to action: a reminder that the smallest gesture can make a world of difference…”
Lisa Consiglio
Executive Director
Aspen Writers' Foundation

Anne Gurchick has been involved in animal welfare and rescue work for over ten years, having started in Austin, Texas. In 2004, shortly after selling her business, Anne decided to follow her dream and move to the mountains with the hope of working with animals. She relocated to Aspen, Colorado, and quickly became involved with Friends of the Aspen Animal Shelter (FAAS). Anne has served on the board of FAAS for over seven years and was appointed Director of the non-profit in 2009. Less than six months Anne with her rescued dogs Max, Stryder, Haddie and Bella after arriving in Aspen, Anne was diagnosed with stage II breast cancer and successfully battled the disease.
FAAS kicked off an aggressive spay/neuter/rescue campaign in October 2007. Since that time, the campaign has resulted in the neutering of more than 7,000 dogs and cats in Colorado and beyond. In partnership with Seth Sachson, Director of the Aspen Animal Shelter, the non-profit has also rescued well over 1,000 dogs and cats off death row in shelters where they otherwise would be killed due to overcrowding.
Anne currently lives in Aspen, Colorado, with her four rescued dogs, Bella, Stryder (a Katrina rescue dog), Max and Haddie.
Anne Gurchick, Director of the non-profit Friends of the Aspen Animal Shelter (www.dogsaspen.com), encourages you to make a difference by adopting a shelter pet.

You have subscribed to alerts for Anne Gurchick.

You have been added to Anne Gurchick's favorite list.

You can also sign-up to receive email notifications whenever Anne Gurchick releases a new book.