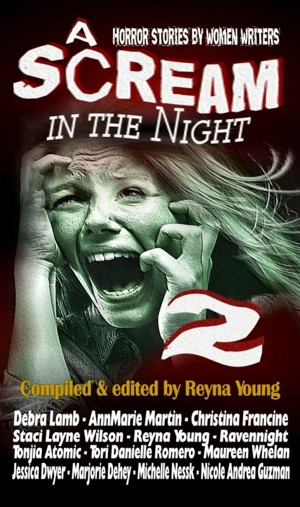 A Scream in the Night 2

Reyna Young has been labeled by press as "The Queen of Horror in the Bay Area" She was born and raised in San Francisco! Reyna Young is a Director, Producer, Writer, Model, Actress, Horror Host and Film Festival Director in San Francisco. Ever since she was a little girl she remembers seeing her first horror movie: John Carpenters "Halloween." It was at that moment she fell in love with being scared. She then decided she wanted to give back to the Horror community and make her way into the Genre she bleeds for. Reyna began following around her film buddies and helping them out on set and acting in their films. She bought books and relied on the Internet to teach her everything she needed to know. From there she created her production company Last Doorway Productions in hopes of bringing a little more horror to the world (never a bad thing). Since then she has written feature scripts, and created a series of short films, which she has Produced, Written, Directed and even starred in. Aside from her film projects, she has also created a show for Independent Horror in the Bay Area. The Last Doorway Show. A show dedicated to Independent Horror Artists which she hosts under the pseudonym Miss Misery. Helping support the Independent Horror Artist and helping filmmakers get their short films shown. If you thought that wasn't enough she also Directs her own Short Horror Film Festival in San Francisco called "A Nightmare To Remember" along with her Co-Director/Co-Founder John Gillette. The Festival consists of twenty minute and under Horror shorts, Prizes, raffle for the audience, guests and sneak peek trailers. Reyna throw's events all around the San Francisco area including Night Of The Zombies, A Zombie Prom and Women In Horror Con. She hosts events around the bay area under the name Miss Misery. She also has her own segment on Creepy Kofy Movie Time called Web of Insanity and you can catch her at every horror convention through the year! Reyna has self published two poetry books and a Film making scrapbook explaining how she shot her short films and how to get started in independent horror film making. She is also on the works of coming out with her own Miss Misery Comic book called "A Haunting Desire" and a Comic Book Series called "Forgotten Tales."

Reviews of A Scream in the Night 2 by Reyna Young

You have subscribed to Smashwords Alerts new release notifications for Reyna Young.

You have been added to Reyna Young's favorite list.

You can also sign-up to receive email notifications whenever Reyna Young releases a new book.