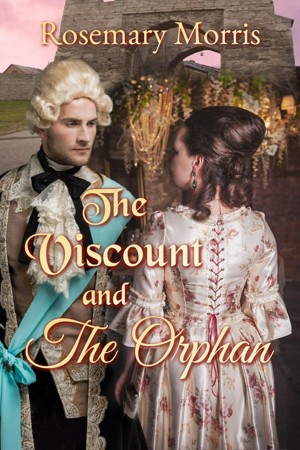 The Viscount and the Orphan

By Rosemary Morris
Rated 5.00/5 based on 2 reviews
Gabriel, Viscount Cavanagh is bankrupt, his fortune wasted on mistresses, extravagance, and gambling. Orphaned, emotionally neglected, deprived of his inheritance and his own person by his grandfather, Adam Maynard, his only option to avoid disaster is acceptance of an arranged marriage proposed by Adam, a ruthless merchant prince More
This classic historical romance erupts in 1703 England.

Gabriel, Viscount Cavanagh is bankrupt, his fortune wasted on mistresses, extravagance, and gambling. Orphaned, emotionally neglected, deprived of his inheritance and his own person by his grandfather, Adam Maynard, his only option to avoid disaster is acceptance of an arranged marriage proposed by Adam, a ruthless merchant prince.

Adam summons his sixteen-year-old ward, wealthy Dorinda Davenport, from boarding school to be Gabriel’s bride. An orphan, she yearns for love. Well-educated, but naïve, she clings to her fantasy of a happy-ever-after marriage to a gentleman as handsome, and charming as her favourite fictional hero. Gabriel is the romantic hero of her dreams, but bitter disillusionment follows the wedding.

Rosemary Morris was born in Sidcup Kent. As a child, her head was ‘always in a book.’ While working in a travel agency, Rosemary met her Hindu husband. He encouraged her to continue her education at Westminster College. In 1961 Rosemary and her husband, now a barrister, moved to his birthplace, Kenya, where she lived from 1961 until 1982. After an attempted coup d’état, she and four of her five children lived in an ashram in France.
Back in England, Rosemary wrote historical fiction and joined the Romantic Novelists’ Association, Historical Novel Society, Watford Writers and many online groups. To research, Rosemary reads non-fiction, visits museums and other places of historical interest. Her bookshelves are so crammed with historical non-fiction, that if she buys a new book she has to consider getting rid of one. Apart from writing, Rosemary enjoys time with her family, classical Indian literature, reading, vegetarian cooking, growing organic fruit, herbs and vegetables and creative crafts.

Reviews of The Viscount and the Orphan by Rosemary Morris

Dorinda Davenport, a naïve sixteen-year-old is summoned from boarding school by her guardian Adam Maynard, a wealthy merchant. An orphan, she knows little of life, but her love of romantic novels has fuelled her belief in the fantasy of a life-long love with the hero of her dreams.
Adam Maynard has also ordered a meeting with his now penniless grandson Gabriel, Viscount Cavanagh, with marriage to his ward in mind. Gabriel has squandered his fortune on a life of extravagance, mistresses and gambling, and realises that his grandfather’s proposal of a marriage with innocent, but wealthy, Dorinda is a way out of the disastrous bankruptcy looming over him.
Dorinda is immediately smitten by the handsome Viscount and welcomes the proposed marriage with him. Sadly, the same cannot be said for Gabriel, who has bedded many beautiful women and sees Dorinda as quite plain and socially inept. But he is forced to follow his grandfather’s edict and marry the girl—leading to bitter disillusionment for Dorinda when she learns of his duplicity.
As always Rosemary Morris does not disappoint. Her attention to the smallest detail of historical fact is spot on, taking the reader back to a time long past when it was customary for marriages to be arranged for reasons far removed from romance.

(reviewed the day of purchase)
Vijaya Schartz reviewed on Oct. 26, 2022

Never underestimate the power of a naïve orphan heiress.
In a time when marriages were arranged for financial gain, age didn’t matter much. Consummation just would have to wait a few years, until the young lady was ready. But these things don’t always go according to plan. Young Dorinda is an heiress, unaware of her worth, a little plump, too young and naïve to attract men, and enamored with romance novels. No wonder she falls head over heels for the dashing viscount, the knight in shining armor, who will save her from the orphanage, keep her in luxury, and love her forever, like the heroes in her novels.
But Gabriel, Viscount Cavanagh, the incorrigible gambler and libertine, is bankrupt, and his authoritarian father is forcing him to marry the ugly duckling or be ruined. Cavanagh realizes Dorinda has unrealistic expectations and he doesn’t want to hurt her… but with no other choice, he must play the game.
What I like about this novel, is that both characters evolve and mature over the course of the story. Conflicts and mysteries abound, danger is real, mistakes are made, feelings are shattered, but love still finds a way in the end… with an unexpected twist.

You have subscribed to Smashwords Alerts new release notifications for Rosemary Morris.

You have been added to Rosemary Morris's favorite list.

You can also sign-up to receive email notifications whenever Rosemary Morris releases a new book.