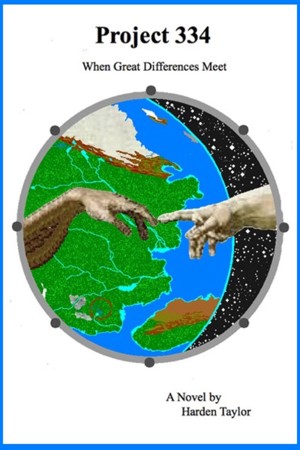 By Harden Taylor
Rated 4.00/5 based on 1 reviews
She wondered how it could possibly be that something mortal and imperfect could come from the residence of the Gods. Was it a message? A warning? Retribution for some unstated sin? Or, most shockingly something not encompassed by the Seven Books? She would be forced to know when the thing from between the stars arrived.

Yes, I was a cog in the industrial machine, grinding out reams of technical and business writing to support the once mighty American manufacturing colossus. But something happened in the early spring of 1995 – a bolt of lightening from the god of letters. “Fiction,” She said. Bit-by-bit I tried it, a little more each year till it became for me the quixotic enterprise it is today. Yet, I can’t complain, though my family may from time-to-time, because I found in this experience a liberation of style and content that is very appealing, drawing me into a new kind of grinding – a love/hate enterprise that wears the repetitive trudge down to fine dust.

My body of work (Fiction only):

v Four full-length novels under my copyright –
ÿ Project 334 – The first person to leave the solar system discovers and attempts to understand a battered civilization. His presence generates conflict (this is the first expedition.) – unpublished.
ÿ Cerulea – A History of the Second Expedition – A pregnant female Robinson Crusoe-type story. She raises her children & incestuously created grand children alone on a forbidding planet – unpublished.
ÿ Outhouse by the Moon – A series of murders at a small midwestern university by a Christian doomsday cult of prominent citizens leads to revelations of a terrible conspiracy – unpublished.
ÿ A Rock by Moon World – Two twelve-year-olds discover a Lilliputian world ripped apart by war. They save them from the rages of a maniacal leader – published on Kindle. Based on my short story of the same name.
v Completed short stories – This is an eclectic assortment of over 40 stories with different styles, themes and character portraits ranging in length from 240 to 40,000 words.
v I have other novels short stories and poems in various stages of completion, including sequels to Project 334 /Cerulea and A Rock by Moon World.

After a nuclear war that destroys most of their civilization, the planet of Ahran organized itself around a religion that turned its faith to the stars and interpreted natural electromagnetic noise from space as messages from their creator. All this so they could have peace and survive, and it worked well for some time. Jara faces an unthinkable dilemma when she cannot figure out how to translate the messages she receives during the course of her job and make the translation suit the enforced religion. Is she a failure? Unfaithful? Deserving of punishment?
Jara is torn between seeking the truth or remaining faithful to what she is told she must believe, even if she must lie. And the survival of the refugee visitor from planet Earth depends or her actions. Tom Wilson is alone on his spaceship and he has recently awoken from cold sleep. In his confusion and his attempts to land on an alien planet where he might have hopes of survival, he accidentally transmits his diary entries to the alien planet, and to Jara.
This reader found the story engaging and hurried to keep reading to learn how the conflicts would be resolved. It did seem that the ending was too abrupt and there should have been a little more story surrounding the final scene. But it still is an enjoyable read, and the author does indicate there are more books.

You have subscribed to alerts for Harden Taylor.

You have been added to Harden Taylor's favorite list.

You can also sign-up to receive email notifications whenever Harden Taylor releases a new book.