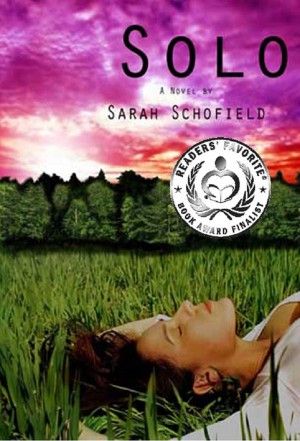 By Sarah Schofield
Rated 5.00/5 based on 2 reviews
As a military brat, Eliana Davis is no stranger to moving from place to place. However, moving in the middle of her sophomore year to the small Oregon town where her parents grew up is something she never expected. Knowing she will only be there for a year, she is torn between making new friends or keeping to herself. Will she listen to her heart or keep flying solo? More
Excerpt:

I looked past Gramps and saw my grandmother with her arms firmly crossed. She wasn't your typical grandma. You know, the kind with fresh baked pies sitting on the windowsill. My grandmother was... Well, she was more like a warden.

I slowly approached her.

"Hello, Eliana." She awkwardly gave me a half-pat-on-the-back kind of hug.

"Hi, Grandma; thanks for taking us in." I tried to chisel through the ice.

"You're welcome," she replied stiffly.

"Hello, dear. I have your rooms ready. I put Eliana in your old bedroom. You're in the room across from hers, just in case."

We each grabbed a bag and entered the house. I opened the door to my "so-called" bedroom and sucked in the aroma of rose potpourri and moth balls. My eyes rounded at the princess palace with its frilly pink walls bordered by purple castles and a dozen--that's right--twelve porcelain dolls staring at me from a wooden shelf. If anything could scare me, those beady eyes could. I stood there flabbergasted and Mom walked in.

"You're sure lucky I love you," I whispered.

Solo is Sarah Schofield's debut novel. She enjoys life in Bend, Oregon with her husband and two children. When she is not working on her next novel, she is relaxing in the great outdoors, reading books, and cleaning food off the ceiling. To learn more about Sarah, visit her website at www.SarahSchofieldBooks.com.

Solo was incredible! I could not put it down. It's perfect for a quick read which is still very touching. I found I really cared about the characters and what happened to them. I could really relate to the main character. Overall, the story is beautifully written and the characters are well developed. Although, Solo focus high school students it is still an excellent read for those who have finished high school. I would highly recommend reading Solo.

(reviewed 42 days after purchase)
rhonda laney reviewed on March 1, 2012
(no rating)
5 STARS
I love getting to read new authors work and the surprises that are in store.
Solo is a well told story that I was lost in.
I love the town it was set in. My in-laws are from that area so I could picture the area pretty good.
Eliana two months left in the school year gets told that her dad is called to deploy for a year and that she and her mom where going to move in with her parents for that year in Oregon.
Eliana is having a hard time with the move to small town and doesn't want to get involved with anything.
Casey a junior is very welcoming to her and they have 4 classes together. After gym class Eliana goes to change into levis and can't find her clothes.
she is upset that her last class she has to wear short gym shorts. She ends crying in study hall. Cute guy gives her tissue.
Sasha is popular cheerleader who is Casey's friend who took her cloths, thinks she so special.
Eliana after a week sitting with Casey and her friends for lunch decides not to eat with them and make Casey have to choose.
Eliana loves to run and One day as she was running a truck almost ran her down she fell aways down a hill. It was Lucas the cute guy in study hall. He felt bad and was shaken gave her a ride home. Lucas was trying to be her friend.
Eliana at a view point saw a meadow and mapped her way to it one day and after that she would spend a lot of her time alone dancing and doing gymnastic tumbling for her own pleasure. No one knew she went their.
Lucas asked her to prom and she agreed to go with hijm as friends only and tried to not to get attached to him.
The relationships are pretty intertwined with most of the people living in the town most of their lives.
Sasha and her boyfriend continued to spread trouble and rumors about Eliana. Eliana took the high road but decided to show her up on the talent show,
I cared about the characters and wanted to know more about them. I would more stories by Sarah.
I was given this ebook in exchange for honest reviews from librarything.
12/22/2011 PUB M.O.I. Publishing

(reviewed the day of purchase)
Camber Roseberry reviewed on Jan. 13, 2012

This is a great book! Looking forward to the next one!

You have subscribed to alerts for Sarah Schofield.

You have been added to Sarah Schofield's favorite list.

You can also sign-up to receive email notifications whenever Sarah Schofield releases a new book.