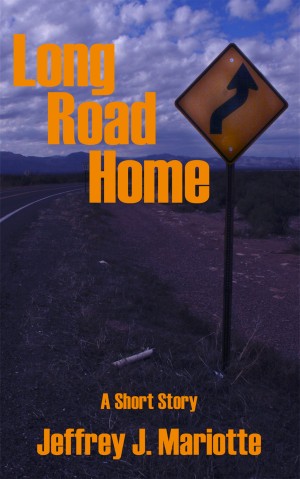 By Jeff Mariotte
Rated 5.00/5 based on 1 reviews
"Long Road Home" is a short story that award-winning author Jeffrey J. Mariotte wrote for KUAZ, the Tucson, AZ NPR radio station, to be read aloud accompanied by music and sound effects. It was part of KUAZ's "Arizona Spotlight" holiday program. While it's not precisely a Christmas story, it is set during the holiday season, and contains themes of love, loss, and longing. More
As Heard on NPR!

Jeffrey J. Mariotte read "Long Road Home" aloud at the KUAZ/NPR studios on the University of Arizona campus. After the producers added music and sound effects, the reading aired on the station's "Arizona Spotlight" holiday program, and was made available online. The short story offered in this e-book (approx 1200 words) is exactly as it appeared on the air, and includes a link to listen online or download the MP3 for free.

"Long Road Home" is a weird tale, not exactly horror but most definitely creepy and slightly dark. Jeffrey J. Mariotte is most known as a novelist and comic book writer, but his reputation for delivering excellent short stories, full of character and heart, is growing all the time.

He is also the author of many comic books, including the original Western series Desperadoes, some of which have been nominated for Stoker and International Horror Guild awards. The miniseries Desperadoes: Buffalo Dreams was chosen as the Best Western Comic Book of 2007 by True West Magazine. Other comics work includes the bestselling Presidential Material: Barack Obama, an original miniseries based on TV series The Shield, original graphic novel Zombie Cop, the original miniseries Garrison and Fade to Black, and many more.

He has held many jobs in the publishing industry, including bookstore manager and owner, VP of marketing at WildStorm Productions/Image Comics, senior editor at WildStorm Productions/DC Comics, and editor-in-chief at IDW Publishing. Currently, he's editor-in-chief at Visionary Comics and division chief at Visionary Books. He is a member of the International Thriller Writers, Sisters in Crime, the Horror Writers Association, and the International Association of Media Tie-in Writers. Learn more about him at jeffmariotte.com and follow him on Facebook at facebook.com/JeffreyJMariotte and on Twitter at @JeffMariotte.

LONG ROAD HOME's basic idea is familiar to me. A widower on his way home after a holiday party that was something of a disaster, driving on familiar roads, suddenly finds those roads not so familiar. Turns, long stretches, entirely different from those he'd driven along so many times.

That happened briefly to the author and to me once. I was driving on a road I passed through every day on the way to work and, for just an instant as I rolled up to a stoplight, I recognized nothing. That was very disconcerting.

You have subscribed to alerts for Jeff Mariotte.

You have been added to Jeff Mariotte's favorite list.

You can also sign-up to receive email notifications whenever Jeff Mariotte releases a new book.