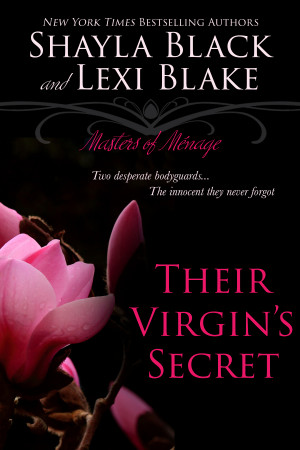 Rated 4.00/5 based on 6 reviews
Will her secret bring them together or tear them apart?

A Masters of Menage Novel More
Two Men on a Mission

Security Professionals Burke and Cole Lennox have shared women before but never meant to fall in love with one. Their lives are precarious, always on the edge of trouble. But Jessa Wade is too tempting, too perfect to let go. They’re on a dangerous mission, but they can’t help but get close to the beautiful, innocent artist. When their mission takes them to a foreign land, they reluctantly leave their love behind, promising to return for her one day.

A Woman with a Secret

After her lovers disappeared, Jessa Wade bravely moves on with her life, protecting her secret. But when she becomes the target of one of Burke and Cole’s enemies, the men leap into action, vowing to save their woman and to never leave again. As danger stalks all three, they must come together and face the mistakes of their past. On the run and out of time, Burke and Cole will fight for their future with Jessa. But will Jessa’s secret bring them together…or tear them apart?

Also in Series: Masters of Menage

This is another great Shayla Black book who is always good when you are looking for a little kink in your life.


Absolutly loved this. I thought the fact that one man was dark and, lets face it, a little broody/emo (In just the right quantity) and the other was light and fluffy (We all love a healthy dose of playful smexy's) was a great combo. This of course meant that the story's need to include both brothers was justifyed by the need for balance in the relationship. Makes for a great read and I can't decide whether I liked the first or second one better. I think the first ONLY because I can relate to the heroine more so than in the second. I'm really not outgoing enough to persue men like that so I guess Virgin Captive has a soft spot in my heart. this just rekindled my love for the series and I can't wait for the third installment. 'Their Vigin Concubine' should be awesome.

I have enjoyed both books in this series, but this one was not as good as the first one. The relationship need more work.

I loved this book the story was awesome and the sex was great with all that action I couldn't put it down till I was done.

I enjoyed the story. The action kept you guessing. I felt,there could have been more time spent on the relationship than on the action. Overall a good read.

Every woman's fantasy come true. Jessa meets a pair of to-die-for hot twins while having to work at the family hotel in Manhattan for Christmas. The perk about her family being gone is that she gets to have as much fun as she can.

But this actually happened a year ago. The book jumps back and forth between present day and a year ago. The present day situation is not as desirable. See Cole and Burke are basically mercenaries and the son of the bad guy they were after a year ago when they met Jessa found out how the feel about her and wants to kill her.

When the boys came back to protect her they found out she had a baby, their son! And of course she wants nothing to do with them because they left and never came back. Jessa got a bit annoying to me after they explained the truth and why they had to leave and then why they stayed away. She just kept saying "you're liars" but was that really lying? And if they're here now, why are you still complaining instead of giving them another chance?

Good thing for the flashbacks we kept having to their year ago affair. And Cole was amazing! I was bit better prepared for this book in comparison to the first one. The stories are a bit far fetched and obviously there's a permanent menage situation with brothers again, which has to be tricky! But I did enjoy this book more than the first one.

I read the first in this series and really enjoyed it. This one not quite as much. It was still a good read and I will get the next one when it comes out but for some reason I just didn't quite connect with these characters as much as I did with the ones n the first book. But liked the writing enough that I will look at Lexi Blake's books and I already read Shayla Black.